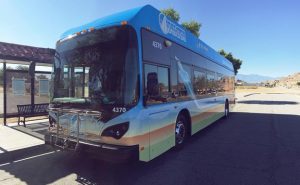 LANCASTER – The Antelope Valley Transit Authority will join public transportation agencies across the country in participating in the National Dump the Pump Day on Thursday, June 16.

Now in its 11th year, the initiative encourages people to leave their cars at home and use public transit instead.  AVTA will offer free bus rides on all local routes for the entire day on June 16.

Staff members will also be on select local buses from 11 a.m. to 3 p.m., playing trivia games with passengers and handing out prizes. Gift cards, free passes and game tickets are just some of the items that have been donated by event sponsors such as Antelope Valley Mall, Lancaster JetHawks, Mulligan Family Fun Center, DryTown Water Park and local stations KTPI and KMIX, according to AVTA.

Anyone who follows the agency on social media will be entered into a drawing for a weekend trip for four to Disneyland, a prize package donated by BYD, AVTA officials said.

The agency hopes “Dump the Pump Day”  will raise awareness about the economic and environmental benefits of taking public transportation.

“Leaving the driving to the AVTA can eliminate costly gasoline purchases, reduce the nation’s dependence on foreign oil, and dramatically shrink one’s carbon footprint,” stated Board Chair Marvin Crist. “Public transit also relieves the hassles and expenses of finding and paying for parking, dealing with auto maintenance and repairs, and negotiating traffic.”

“This is the first time that our agency has participated in Dump the Pump Day, and we are already amazed at the great response we are getting from the public,” stated Executive Director Len Engel. “We are expecting a large number of first-time riders on our local transit service, and we are confident that they will see the benefits of public transportation for themselves.”

Dump the Pump Day is powered by the American Public Transportation Association, in partnership with the Natural Resources Defense Council.