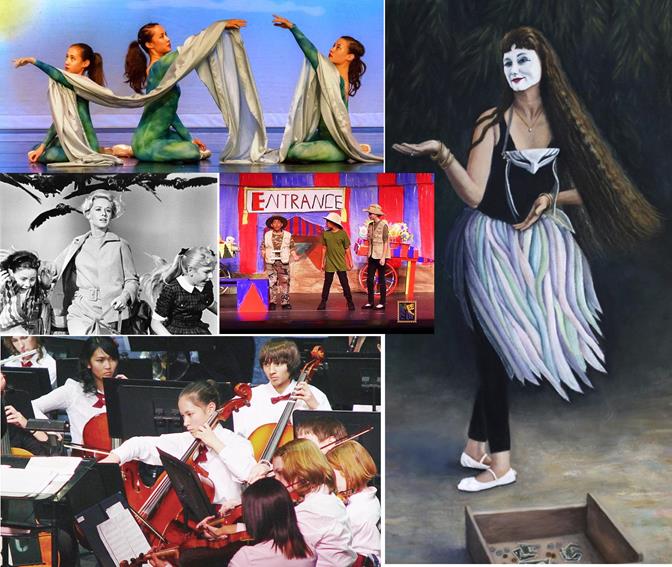 PALMDALE – The Palmdale Playhouse, located at 38334 10th St. East in Palmdale, has announced its 2016 summer lineup, featuring  by a full plate of music, dance, comedy and holiday fun.

West Coast Classical kicks things off with three musical performances. On Thursday, June 2, at 7:30 p.m., they take the stage for a performance of “A Little Night Music,” an instrumental musical experience by its Beginning String Orchestra, directed by Patricia Graham, and Beginning Band, directed by Jeffrey Kaser.

Wrapping up the shows on Saturday, June 4, at 7:30 p.m., West Coast presents “Sounds 2 Beautiful.” Directed by Patricia Graham, the West Coast Classical Concert and Symphonic Orchestras will immerse the audience in an integrating musical symphony. Highlights include Orca Symphony by Serj Tankian from the Grammy awarding winning rock band System Of A Down. Also featured is the popular Donna Diana Overture by Emil Nikolaus von Reznicek and Clarinet Concerto in E Flat, by Franz Krommer.

Tickets for each of these three performances are $15.

Shifting from music to dance, the Palmdale Junior Ballet and Theatre Dance present “Dare to Dance” on Saturday, June 11, at 6 p.m. The dance students will present an exciting and dynamic dance presentation featuring classical, ballet, modern, jazz, hip hop and rhythm tap. Tickets are $12 for adults and $10 for seniors, military and children 12 and under.

For those interested in learning how to sing or improve their vocal performances, the Playhouse will offer two classes. The first is “Perfect Harmony Piccolo,” geared for ages 8 to 14. It will be offered on Mondays, Wednesdays and Thursdays, from 5 to 7 p.m., from June 13 through June 27. Students will be taught the basics of a cappella with professional vocal instruction in a safe and comfortable group setting. Classes will focus on performance skills and musicality, culminating with a live recital at the Palmdale Playhouse. Students will have an opportunity to audition for the advanced level Perfect Harmony Primo on September 8. The cost of the class is discounted to $45 for Palmdale residents, and is $56.25 for non-residents.

The second class is “Perfect Harmony Mezzo,” geared for ages 15 to 24, which will be held on Mondays, Wednesdays and Thursdays, from 5 to 7 p.m.,  from July 11 through Aug. 11. Students will be taught the basics of a cappella with professional vocal instruction in a safe and comfortable group setting. Classes will focus on performance skills and musicality, culminating with a live recital at the Palmdale Playhouse. Students will have an opportunity to audition for the advanced level “Perfect Harmony Primo” on September 8. The cost of the class is discounted to $55 for Palmdale residents, and is $68.75 for non-residents.

The Playhouse will bring some of the best of Hollywood to the big screen with the Summer Classic Movie Series. Featuring some of the best films made by the Master of Suspense, Alfred Hitchcock, attendees will be treated to an episode of Hitchcock Presents, which was hosted by Hitchcock on CBS and NBC between 1955 and 1965, prior to each movie. The Series will feature “Rear Window” on June 16, “Vertigo”  on June 30, “North by Northwest” on July 14 and “The Birds”  on July 28.

Doors open at 6 p.m. and the movies begin at 7 p.m. Attendees who arrive early will receive complimentary dessert and a beverage with paid admission. Tickets are $5 for general admission and $4 for students with current ID. A four pack of tickets with one general admission ticket per movie is available for $15. Tickets are available only at the Playhouse Box Office.

Shifting to art, the Playhouse will host an opening reception for  “Donna’s Home Gallery” featuring the works of Donna Boydstun on Thursday, June 23 from 6:30 to 8:30 p.m.

A California native, Boydstun grew up in Sun Valley. She opened Donna’s Home Gallery in 1983 and sold many paintings through her creative home parties. Her work has been displayed and enjoyed at various festivals and exhibits. Since retiring in 2008, Boydstun has been able to pursue her passion to paint. Her medium of choice is oils, but she paints in watercolors as well. Boydstun is a member of the Santa Clarita Artists’ Association and the Lakes and Valleys Art Guild, and a past member of the Burbank Art Association, A.V. Allied Arts Association, and Palmdale Playhouse Art Group. “Donna’s Home Gallery” will run through Sunday, Aug. 7.

Summer is never complete at the Palmdale Playhouse without stage productions by local youth.  On Saturday, June 25, at 2 p.m. and 6 p.m., the Palmdale Junior Summer Theatre Camp will present “Stories Under the Big Top” by Lorraine Thompson. It’s a circus of laughter and lively storytelling as the ringmaster and players perform a variety of well-known tales such as The Bremen Town Musicians, The Billy Goats Gruff, The Lion and the Mouse, Monkey See, Monkey Do and The Magic Fish. Tickets are $7, with family four-packs available at the Box Office for $20.

At 7 p.m. on Friday, July 29, and Saturday, July 30, the Palmdale Summer Theatre Experience presents “Adventures of a Comic Book Artist.” Written by Pat Lydersen with music by Wendy Woolf, this action packed spoof of the comic book genre features hysterical singing superheroes and dancing villains. Stanley Leonardo Sappovitz wants nothing more than to become a comic book artist and create heroes and villains for the comic books he loves so much. As the janitor at Wonder Comics, he anxiously awaits the day that his boss, D.C. Wunderman, will see his drawings and give him the chance to have his superheroes come alive on the printed page. Stanley’s heroes come alive, but not on the printed page. In an effort to revive his faltering company, Wunderman ordered a set of magical pens guaranteed to bring to life any character drawn. When plans go awry and his staff of artists unwittingly create the dreaded super-villain Doctor Shock Clock, it is up to Stanley to save the day with his own superheroes.

Tickets are $7, with family four-packs available at the Box Office for $20.

Tickets for most Palmdale Playhouse events may be purchased online at www.cityofpalmdale.org/playhouse, or at the Box Office beginning two hours before each show, 38334 10th St. East. For more information, call 661/267-5684.