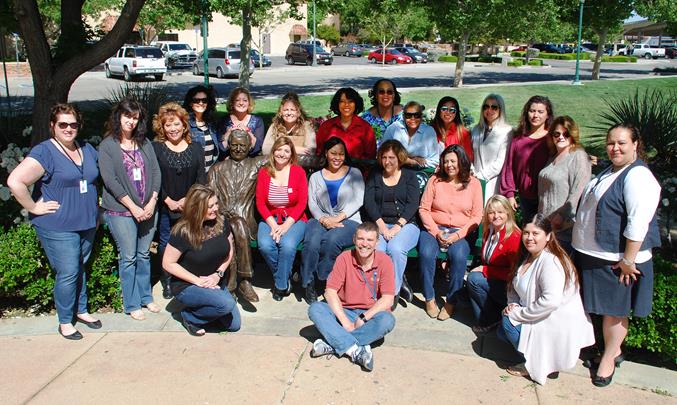 PALMDALE – City of Palmdale employees wore denim on April 27 in support of the 17th Denim Day, a cause to raise awareness about sexual assault and to show support for survivors.

The campaign is presented by Peace Over Violence, a non-profit agency designed to educate the public about rape and sexual assault.

“The city of Palmdale is proud to support causes like this that have positive impact on people’s lives,” stated Palmdale’s Human Resources Manager Patricia Nevarez. “We support and participate in events such as Daffodil Days, the AV Heartwalk, Making Strides Against Breast Cancer, as well as hosting blood drives to help raise awareness about important issues.”

For the past 17 years, Peace Over Violence has run its Denim Day campaign on a Wednesday in April in honor of Sexual Violence Awareness Month. The campaign was originally triggered by a ruling by the Italian Supreme Court where a rape conviction was overturned because the justices felt that since the victim was wearing tight jeans she must have helped her rapist remove her jeans, thereby implying consent. The following day, the women in the Italian Parliament came to work wearing jeans in solidarity with the victim. Peace Over Violence developed the Denim Day campaign in response to this case and the activism surrounding it. Since then, wearing jeans on Denim Day has become a symbol of protest against erroneous and destructive attitudes about sexual assault. For more information on Peace Over Violence, contact 310-392-8381 or visit www.peaceoverviolence.org.