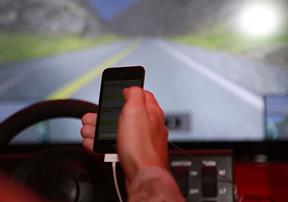 Concerns that teens are among the drivers most likely to be distracted, coupled with the fact that car crashes are the number one killer of teens in the United States, have led authorities to designate April 4-10 as California Teen Safe Driving Week.

“Teen drivers are distracted about a quarter of the time they are behind the wheel,” stated CHP Commissioner Joe Farrow. “The possibilities for distraction are only getting worse. This should be a sobering thought for any parent, or anyone else with teens in their lives.  We all must be the best example we can for our newest, most vulnerable drivers.”

The month of April is also recognized as National Distracted Driving Awareness Month. In California, the CHP and law enforcement throughout the state are working together to focus on education as well as enforcement.

A study by the American Automobile Association (AAA) Foundation revealed that car crashes kill more teenagers than cancer, homicide and suicide combined.  Based on miles driven, teens are involved in three times as many fatal crashes as all other drivers.  Although teens represent seven percent of the licensed population, they are involved in almost 20 percent of all fatal crashes. The AAA Foundation also found that distraction due to cell phone use appears to be much more prevalent than is reflected in official government statistics.

“Most people do not reveal they were distracted by social media or texting before they crashed. Therefore, we know distracted driving is grossly under reported in official reports,” Commissioner Farrow stated. “Driver education and awareness are increasingly important, which is why the CHP works with Impact Teen Drivers to promote California Teen Safe Driving Week.”

Nationwide, 3,154 people were killed and an estimated additional 424,000 were injured in motor vehicle crashes involving distracted drivers in 2013, NHTSA has reported.  NHTSA has also found that, at any given moment during the daytime, an estimated 660,000 drivers were using hand-held cell phones.  In 2013, ten percent of all drivers 15-19 years old involved in fatal crashes were reported as distracted at the time of the crashes, according to the NHTSA.

“The explosion of teens’ almost constant mobile device use during the last decade has perilously upped their distraction level,” said OTS Director Rhonda Craft. “This is a problem that no family can ignore.”

[Information via news release from the the California Highway Patrol.]