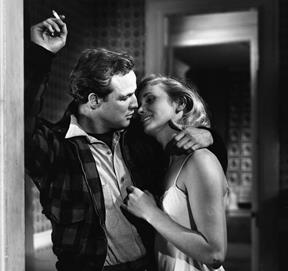 PALMDALE – The Palmdale Playhouse will show the 1954 American crime drama film “On the Waterfront,” this Sunday, March 13, in the next installment of the Winter Classic Movie Series.

Tickets are $5 for general admission and $4 for students with current ID.  Attendees who arrive early will receive a complimentary dessert and beverage with paid admission.

Starring Marlon Brando, Karl Malden and Eva Marie Saint, On the Waterfront tells the story of dockworker Terry Malloy (Brando) who had been an up-and-coming boxer until powerful local mob boss Johnny Friendly (Lee J. Cobb) convinced him to throw a fight. When a longshoreman is murdered before he can testify about Friendly’s control of the Hoboken waterfront, Terry teams up with the dead man’s sister Edie (Eva Marie Saint) and the streetwise priest Father Barry (Karl Malden) to testify himself, against the advice of Friendly’s lawyer, Terry’s older brother Charley (Rod Steiger).

“Travel back in time to golden years of Hollywood and enjoy a classic film in the comfort of the Palmdale Playhouse,” said Palmdale Recreation Supervisor Annie Pagliaro. “With our new state-of-the-art sound and projection system, you’ll get to enjoy this Academy Award winning movie as it was meant to be shown.”

The final movie in the Winter Series will be the 1950 black comedy/drama “Sunset Boulevard,” starring William Holden and Gloria Swanson on Sunday, March 20.