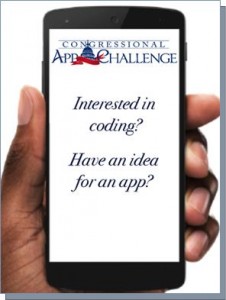 The Congressional App Challenge is a competition that offers high school students in participating congressional districts the opportunity to create original “apps” and submit them to a panel of local judges for a chance to receive recognition by U.S. Congress.

The submission period runs from Nov. 9 through Jan. 15, 2016. The local Challenge is open to students within California’s 25th Congressional District, which include communities throughout the Antelope, Santa Clarita and Simi valleys.

The winning app will be featured on a display in the U.S. Capitol building in 2016.

The App Challenge, which is sponsored this year by the Internet Education Foundation, was created in 2014 to boost student interest in the fields of science, technology, engineering and mathematics, often referred to as “STEM.”

STEM occupations are projected to grow by 17 percent between 2008 and 2018, compared to 9.8 percent growth for non-STEM occupations. According to some estimates, the U.S. may be short as many as 3 million high-skilled workers by 2018.

“Investing in our students now to help them acquire STEM-based skills is crucial to maintaining America’s competitive advantage,” stated Representative Knight in a news release. “The Congressional App Challenge is a fun way to encourage students to pursue those skills.”

For more information about the Congressional App Challenge and official rules, visit congressionalappchallenge.us, or Rep. Knight’s website at knight.house.gov/congressional-app-challenge.

[Information via news release from the office of congressman Steve Knight.]