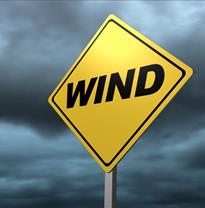 As of this morning, there remained uncertainty about the trajectory of the expected storm system and the volume of rain it will generate. But National Weather Service forecasters said coastal slopes and foothills will experience the highest rainfall amounts.

According to preliminary estimates, Los Angeles County will receive between a quarter-inch and an inch of rain as a result of the system while other areas of Southern California get less than a quarter-inch, an NWS statement said.

“Since many areas have seen little or no rainfall in the past couple of months, buildup of oil on the roadways could lead to extra slippery driving conditions” once rain starts falling, the statement warned.

Moreover, “minor urban roadway flooding will be possible in Los Angeles County, which could be worsened by clogged storm drains and culverts.”

Since the weather system is the product of a warm mass of subtropical air, it will not produce any snow, forecasters said. But it will generate high winds on Tuesday, when gusts of more than 40 miles per hour are expected in the Antelope Valley and mountain areas, they said.

The strongest winds are forecast to swirl in the western tier of the Antelope Valley, forecasters said, adding that drivers should beware of crosswinds.

Temperatures, meanwhile, will be several degrees lower than during last week’s heat wave, when highs topped 100.

The NWS forecast highs today of 83 in Palmdale and 84 in Lancaster. Temperatures will go down a few degrees Tuesday and again Wednesday and begin rising again on Thursday.