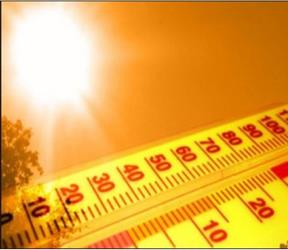 LOS ANGELES – Temperatures and humidity levels rose to uncomfortable levels today at the start of a heat wave expected to last until early next week.

“The combination of high pressure aloft and weak offshore flow will bring very hot weather to much of Southwestern California …,” according to a statement by the National Weather Service. Forecasters said “slight cooling” is expected Friday and Saturday, although temperatures will not be returning to normal until early next week..

“The prolonged heat wave will bring a risk of heat-related illness through much of the week. Those at highest risk include children, the elderly, and pets without adequate shelter,” warned the statement, which noted that the heat would heighten electricity use throughout the region, “increasing the threat of power outages.”

Temperatures today and during the rest of the heat wave will be running 10-15 degrees higher than normal, said NWS meteorologist Kathy Hoxsie. The high heat is being attributed to high pressure developing over the region, combined with the fact that only weak winds are blowing in from the ocean.

Also afflicting the region today is high humidity, which is forecast to be around 40 percent in valley areas, compared to the teens, which would be normal, Hoxsie said. The humidity is attributed to lingering moisture from Hurricane Linda.

Forecasters said those at greatest risk of suffering heat-related ailments were infants, the elderly, the homeless, outdoor workers and people taking part in outdoor activities in the heat.

They urged residents to drink plenty of water; wear light-colored and lightweight clothing; stay out of the midday sun; check on neighbors and the elderly to make sure they are not being overwhelmed by the heat; and never, ever leave children, the elderly, or pets in a vehicle parked in hot weather.

The NWS forecast sunny skies today and highs of 100 in Palmdale and 101 in Lancaster. Temperatures will be a couple of degrees higher in several communities on Wednesday and start a cooling trend on Friday. By Monday, many communities that will have withstood temperatures in the 90s and above will be back in the 80s.

3 comments for "NWS: Heat wave expected to last until early next week"