EDWARDS AFB – After weeks of investigative work, two minors confessed June 8 to committing vandalism at Desert High School and nearby school district maintenance buildings. From the end of April through mid-May, just under $22,000 in damage to school district property was caused by individuals living on base. The identities of the parties responsible are not being disclosed.

According to Loretta Gibson, Muroc Joint Unified School District superintendent, the school district will be pursuing disciplinary action and will seek restitution for the damage from the alleged vandals’ parents.

The Edwards community became increasingly concerned after reports of the vandalism spree were published by the base, leading volunteers to patrol on their own around the schools.

The Kern County Sheriff’s Department had been investigating incidents of vandalism at Desert High School for four consecutive weeks when the 412th Security Forces Squadron offered to assist. The fourth incident at the maintenance buildings located by Desert High School was much more destructive than the previous incidents, accounting for the bulk of the damages. 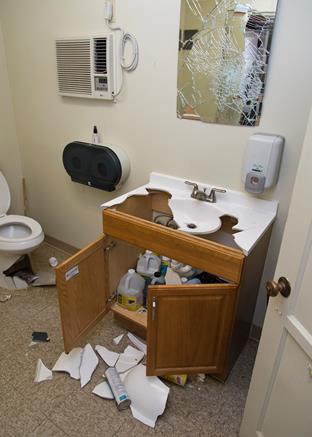 “We asked Kern County because it’s their jurisdiction. We said, ‘We’d like to do surveillance to see if we can catch them in the act. It’s been four weeks straight. In theory they’re going to do a fifth,'” said David Randolph, 412th SFS lead investigator.

That fifth week, no damage was done. However, in the fourth week, the alleged vandals logged onto a school computer and visited various websites.

“The school’s firewall pinged off because they were looking at things they shouldn’t have been looking at. That gave us a time period, which was about 2 p.m. on Sunday; it was Mother’s Day to be specific,” said Randolph.

Security forces started patrolling the area, and two weeks later, got their first investigative lead. An officer who had been patrolling the school on foot was driving away from the school when he saw two minors quickly put a bag away when they saw him. He stopped the individuals and conducted a quick field interview to take down their names and check their identification.

Meanwhile, Kern County deputies continued to investigate anonymous information provided through WeTip reports. According to Randolph, minors often want to brag about their “mischief” to their peers, but in this case, that was “not really happening.” WeTip made up for the lack of chatter.

In the combined efforts of off and on-base police services, there was reasonable belief that the minors were involved and they were brought in for questioning. After four days of interviews, 412th SFS determined that one of the juveniles allegedly caused most of the damage while the other accompanied as more of an accessory.

While the majority of the vandalism occurred in maintenance buildings, Desert High School’s snack bar and the football booster snack bar were broken into in the previous weekends. The alleged vandals damaged the booths and stole spirit wear, drinks and food items. Additionally, several trash cans on campus were set on fire the weekend of May 2. The minors confessed to those incidents as well.

“This type of destructive behavior is disruptive to the educational process and impacts the sense of pride in the school that so many of our great students exhibit each and every day,” said Gibson. “Our employees are impacted as they have to put their regular work assignments aside to clean up the useless destruction. We have heard from base families that certainly do not condone this type of behavior and are outraged that this is occurring within the base community. I think the effects of such actions are equally felt by all.”

Among the damaged items were a desk, computers, lockers, light bulbs, a water cooler, fire extinguisher and coffee machine. Windows were broken along with a bathroom vanity and toilet and holes were put in the walls. In the parking lot a vehicle was damaged and the rear window broken.

The vandalism is “discouraging to any members that live on base,” said Randolph. “The Kern County school system is always trying to improve itself. They’d rather see that money used more appropriately so their kids can benefit from a better education.”

Investigator Aldrin Aranda, 412th SFS, added that this investigation is a good reminder for parents to be more involved in their children’s lives.

“It’s hard with military families because you’re not always home or one is deployed,” said Aranda. “At least ask them how their day is going or what they did that day – it might help with this kind of stuff.”

Matthew Kent, 412th SFS investigator, said the juveniles will also have to answer for their alleged actions before the Juvenile Intervention Council on base.

The JIC, run by the 412th Mission Support Group commander, is more administrative in nature than judicial and runs parallel with the civilian prosecution. The parents bring their dependents forward voluntarily to talk about what they did and why. The 412th MSG commander will assign a corrective action that is rehabilitative in nature such as community service.

“It’s run in a similar fashion as a courtroom, but there are no charges preferred to those individuals,” said Kent. “They have base access privileges; if they want to keep them, along with the guardian’s parents involved, they would bring the minors forward voluntarily to talk about why they did what they did and if they plan to stop doing it.”

The school district is currently working on a contract to install security systems.