Linda Jackson of Lake Los Angeles was booked for murder at Lancaster Sheriff’s Station and is being held in lieu of $1 million bail, according to Sergeant Diane Hecht of the Sheriff’s Information Bureau. 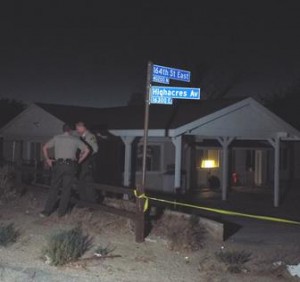 The victim was found Tuesday, June 16, in the 40200 block of 164th Street East, according to a news release from the Sheriff’s Information Bureau.

“Deputies from the Palmdale Sheriff’s Station responded to the area shortly after 1:18 p.m. regarding a person injured and bleeding at the location. Upon their arrival, they discovered a… male Hispanic adult bleeding and unresponsive,” the news release states. “The man was pronounced dead at the scene.”

LASD inmate records show Linda Jackson was arrested around 3:15 p.m. Tuesday and booked on suspicion of murder around 3:50 a.m. Wednesday.

Sheriff’s homicide detectives did not reveal Jackson’s relationship, if any, to the victim, or say whether they lived at the same address, nor did they provide specific details of how the man died.

Anyone with information about this incident is encouraged to contact the Los Angeles County Sheriff’s Department’s Homicide Bureau at (323) 890-5500. To remain anonymous call Crime Stoppers at (800) 222-TIPS (8477).

UPDATED 6.18.15: The victim has been identified as 59-year-old David Ruiz. Read our updated story at: AV woman charged with murdering boyfriend with canned foods