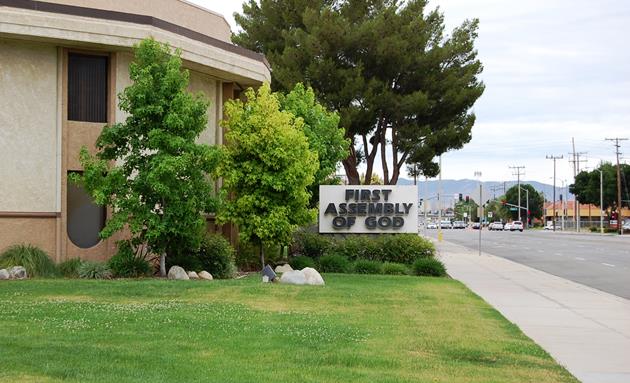 LANCASTER – A childhood sexual abuse civil lawsuit against an Assembly of God church in Lancaster claims a female was repeatedly sexually abused by a youth group leader, and church officials became aware of the abuse but failed to report it to law enforcement.

The lawsuit was filed this week in the Los Angeles Superior Court on behalf of Leonor Vasquez, who was a minor at the time of the sexual abuse alleged in the complaint, according to attorneys for the Zalkin Law Firm who held a news conference Tuesday.

“The civil complaint identifies four defendants: the Assembly of God Pentecostal Church in Lancaster, California; the national organization, the General Council of the Assemblies of God located in Springfield, MO; and two agents of the church, Michael Walsh, the alleged perpetrator and his wife Sharon Walsh,” the plaintiff’s attorney, Alex Zalkin, stated in a news release. [View a copy of the complaint here.]

According to Zalkin, the defendants are not yet named in the filed complaint to comply with California Code of Civil Procedure Section 340.1, which states “no defendant may be named except by ‘Doe’ designation in any pleadings or papers filed in the action until there has been a showing of corroborative fact as to the charging allegations against that defendant.” The names will be added to the complaint once a judge determines the suit has merit, and Zalkin said he expects to have that decision very soon.

According to the civil complaint, Leonor Vasquez began attending the Assembly of God Church in Lancaster in 1995 at the age of 13 and she participated in services, youth events and stayed at a church camp.

“During this time, she met the defendants, Michael and Sharon Walsh, on a church mission trip to Mexico,” Zalkin stated.

According to the complaint, when Leonor’s mother left the country in 1998, the defendants found out through contacts at the church that Leonor needed a place to live and offered her to move in with them.

The complaint “alleges that Michael Walsh sexually abused and molested the plaintiff on multiple occasions from 1998 to 2001, when the plaintiff was 16 to 18 years old and was living with the Walsh[es],” Zalkin stated in the news release. “During this time, the Walsh[es] acted as youth group leaders for the church and also facilitated other church activities, including bible study and chaperoned other events.”

The complaint also claims that church employees, including the lead pastor of the congregation, became aware of the alleged sexual abuse and failed to report it to law enforcement or take any other actions to prevent future acts.

“This case is yet another sad example of how children are at risk when religious institutions chose to harbor predators rather than protect children from harm,” Zalkin stated. “In this case, the Assembly of God local congregation and the national organization failed in their legal duty to protect children in their care from a sexual predator even when they were aware of his actions.”

Eight causes of action against the defendants are detailed in the civil complaint – negligence, negligent supervision/failure to warn, negligent hiring/retention, negligent failure to warn, train or educate the plaintiff, battery, intentional infliction of emotional distress, breach of statutory duty and gender violence.

The complaint asks for damages, punitive damages and costs based on the plaintiff’s physical injury and, physical manifestations of emotional distress, as well as expenses for medical and psychological treatment, therapy and counseling.

Calls and emails to the Assembly of God church in Lancaster, Pastor Majeske, and the General Council of the Assemblies of God were not immediately returned Tuesday. Attempts to reach Michael Walsh by telephone on Tuesday were unsuccessful as well.

UPDATED 6/10/15: RESPONSE FROM THE LANCASTER FIRST ASSEMBLY OF GOD

The Lancaster First Assembly of God on Wednesday, June 10, forwarded the following response to The AV Times, via email:

“The Lancaster First Assembly of God is in receipt of the article written in the Antelope Valley Times. We are saddened by the allegations in the article. Because of the serious nature of the allegations, and the church’s adamant position of opposing all forms of abuse or exploitation, this matter will be investigated. Since this article is our first knowledge of the suit we have turned the matter over to legal counsel. In the interest of the privacy of everyone involved The Lancaster First Assembly of God will not comment on this matter. As always we pray for and seek the Lord’s guidance in all matters and for all involved.”