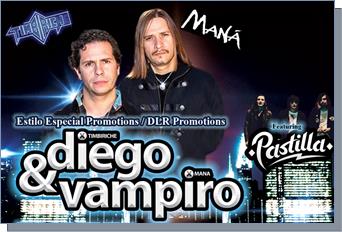 The concert kicks off at 8 p.m. Friday, June 12, at the University of Antelope Valley Grand Ballroom, located at 44055 N. Sierra Highway. Tickets are $35 for general admission and $80 for VIP, which includes a meet and greet and photo opportunity with the artists.

More on the performers

Diego Schoening is a Mexican singer, actor and television host. He is best known as a former member of the 80’s Mexican pop-rock group Timbiriche. The group has sold more than 20 million albums worldwide and was one of the most successful bands in Latin America from the first half of the 80’s to the first half of the 90’s. Several ex-Timbiriche members went on to have hugely successful careers in both music and acting, most notably Paulina Rubio and Thalía.

University of Antelope Valley is giving away two VIP packages to the show.

One lucky person will be randomly chosen Thursday, June 11, to receive the two packages, which include a FREE dinner with the artists before the show, VIP tickets to the show, and a meet and greet with artists after the show.

HOW TO ENTER: Simply submit your information to: https://www.uav.edu/index.aspx?recordid=571&page=106

The winner will be announced on UAV’s social media networks.