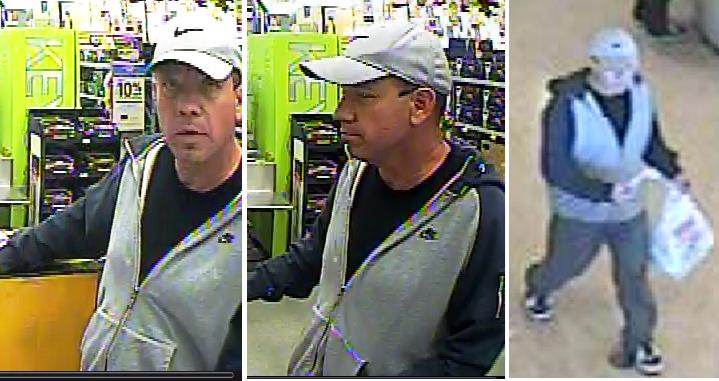 PALMDALE – If you recognize the man in these images, then Palmdale Sheriff’s Station detectives would like to hear from you.

The suspect is wanted for vehicle burglary and theft by credit card.

The alleged theft occurred Tuesday, Feb. 17, 2015, between 8:20 and 9:20 a.m. An unknown suspect broke into a victim’s vehicle that was parked at the aqueduct near 60th Street West and Avenue N, according to Palmdale Community Relations deputy Jodi Wolfe.

“The suspect stole the victim’s credit card and made numerous unauthorized transactions at Lowe’s, Home Depot, Vons, and USA Gas Station in the city of Palmdale,” Wolfe stated.

The suspect appears to be a white male, approximately 45 to 55 years old, with blondish-brown hair.

During the time of the illegal transactions, the suspect was wearing a light-colored “Nike” baseball hat and a grey and black hooded sweatshirt over a black t-shirt, with grey pants and white and black sneakers.

Anyone with information on the identity or location of this suspect is encouraged to contact Detective Saucedo of the Palmdale Sheriff’s Station at 661-272-2460. To remain anonymous, call LA Crime Stoppers at 800-222-TIPS (8477).