Every year, employees selected for this leadership development program must organize a project at NASA Armstrong Flight Research Center. For their project, Wright, Chin and Martin arranged an open house for students in the Muroc School District, base personnel, military and their families to see what NASA is doing at Edwards Air Force Base.

The mission of the event was to increase the community’s awareness of NASA Armstrong Flight Research Center’s missions and capabilities, Martin said. 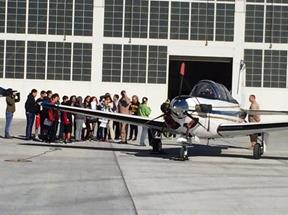 “We had three goals. The first one was to increase the basewide awareness… the second was to increase our own center’s awareness, get people knowledgeable about the things that the other side does,” Martin said. “The third part was to do STEM outreach to the local schools, so we brought the Muroc Unified School District on in the morning and Edwards Air Force base [students] on in the afternoon.”