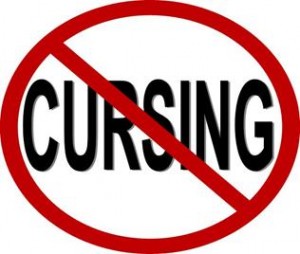 Have curse words become so common they lost their shock value?

Curse words are supposed to be used when angry, but too many people use them in every sentence. Those words make them sound unintelligent and unprofessional. Using curse words isn’t cool; it’s actually really annoying and rude.

Too many people use foul language in their everyday conversations. Many of the students, and sometimes the teachers, use curse words at school. Those kinds of words are immature, especially when you are in a professional place.

If you use curse words in a professional setting such as a job interview, the person doing the interview will think that you are unintelligent by the way you speak.

Some people think curse words are just a normal part of our language, and they use them in their day-to-day lifestyles. What those people don’t know is that curse words have a true meaning, which isn’t just used in normal conversations.

The words shouldn’t be used at all, but if they are used, they ought to be used when in pain or angry.

To resolve this issue with cursing, schools and jobs should prohibit using foul language. This may reduce the amount of people cursing, because a lot of people are afraid to be in trouble.

If it is a personal issue you have with yourself, try using substitutes like “oh fudge” or “dang it.” You will eventually start getting used to those instead of the curse words.

If that technique doesn’t work, then every time you say a curse word, snap your wrist with a rubber band. The pain will cause negative reinforcement to help you stop cursing… or make you curse more.

Curse words today have become so frequently used that they have lost their meaning. People use them way too often. If you start cursing constantly, then remember this: It’s unprofessional, annoying, and rude.

25 comments for "Are curse words used too often?"