PALMDALE – A Palmdale family’s pet dog is alive thanks to local firefighters.

A fire broke out around 5 p.m. Thursday at the Carmel Apartments on the 38700 block of 11th Street East in Palmdale. 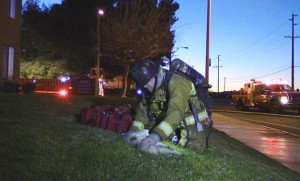 Firefighters arrived and found smoke coming out of a second floor apartment, according to Capt. Jessica Post of the Los Angeles County Fire Department.

“It was an oven fire that extended to the kitchen,” Post said. The apartment’s occupants were able to get out unharmed, but firefighters had to pull a small unconscious dog from inside the apartment.

The dog was given oxygen at the scene and is now doing really well, Post said.

The fire was knocked down in less than 10 minutes, and no injuries were reported.

11 comments for "Firefighters save dog in Palmdale apartment fire"