This year’s tournament attracted 17 teams, from as far away as Tehachapi, to compete in this season’s project – World Class.

Team 8989 Innovative Investigators and Team 4115 Phi Apprentice competed in the finals. In the end, Team 8989 won first place for robot performance, as well as the Robot Programming award.

Team 4115 Phi Apprentice earned the Championship trophy, meaning that this team was recognized as being well rounded in all three elements of FIRST Lego League. 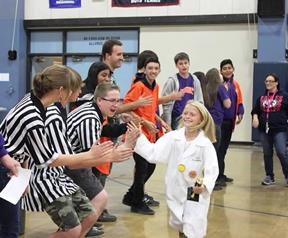 Team 9789 won the Mechanical award and placed third.  The High Desert Lego Tournament was a great experience for the participating teams, as well as for the hosting team, Eagle Robotics.

Team 399 Eagle Robotics also kicked off its “Name a Robot” contest. Children in grades K-8 have the opportunity to enter a submission to name Eagle Robotics’ 2014-2015 competition robot.

The deadline for submissions is December 19, and the winning name will be announced on Jan. 10, 2015. For more information on how to participate, visit Team399.org.

The purpose of FIRST Lego League and the High Desert Lego Tournament is to inspire students in science and technology.