By AAFES and Williamson-Dickie Mfg. Co.

A mother of seven children, Lemus’ 12-year career spans humanitarianism, volunteerism and an unmatched work-life balance. On Saturday, Nov. 8, Lemus will be honored and named the winner during a ceremony at the Exchange store at Edwards Air Force Base.

Nominated by her husband for her courage and selflessness, Lemus consistently exemplifies heroism both in the Air Force and at home. Despite helping to oversee unit and resource deployment for major foreign affairs and domestic emergencies such as Hurricane Katrina and Operation Iraqi Freedom, you can find Lemus leading the Parent Teacher Association treasury at her children’s schools, volunteering at her local church and helping her children develop through music, sports and academics. Her nurturing qualities extend to the military, where she educates families about available scholarships and suicide and domestic violence prevention programs.

“We’re honored to name Senior Airman Veronica Lemus the 2014 Dickies American Hero of the Year,” said Matthew McCartin marketing chief for Dickies. “Veronica’s service to her country and family embodies countless heroic qualities that we value. To say that we were inspired by her dedication and sacrifices would be an understatement.”

Lemus was drawn to the military at a young age and has a rich background in the Army National Guard, Air National Guard, and Air Force Reserves. Service life changed for Lemus after severely injuring her neck and back while training for Army Officer Candidate School, but she refused to let the setback preclude her involvement with the military. Her passion for service amplified six years ago after making a humanitarian trip to Bosnia, where her Guard unit rebuilt a school and rallied to gather books, supplies and incremental resources for the town’s children.

“Being named Dickies American Hero of the Year has been one of the most humbling things I’ve ever experienced, especially when I consider the number of deserving heroes I’ve met in my life,” said Lemus. “While service life has its challenges, I can’t imagine doing anything else; nor would I want to. I want to express immense gratitude to my family, the Exchange and Dickies for recognizing the sacrifices made by all military members and their loved ones.”

Throughout the summer, Dickies and the Exchange encouraged individuals to nominate current or retired members of the United States military or family members of U.S. Military servicemen and women who portray the qualities they believe exemplify an American Hero.

More than 330 photo, essay and video entries were submitted, and after an extensive public voting period, Lemus’ inspiring story earned the victory.

“Now in its third year, the Dickies American Hero of the Year campaign shines a spotlight on military members and their families, who continually make personal sacrifices for the betterment of our country,” said Exchange COO Mike Howard. “Countless deserving candidates were submitted this year, and we’re thankful for their ongoing service and commitment.”

American Hero of the Year Veronica Lemus and her husband, Vladimir, were recently featured on the television show “FOX & Friends” to talk about the big win. Click the image to go to the video page or view the video by clicking here. 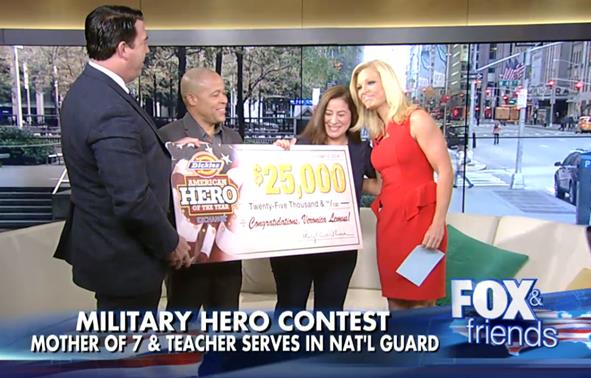