LLANO – A 54-year-old man was arrested Thursday morning after authorities raided a Llano property and found drugs, weapons and evidence to suggest the resident was manufacturing explosives, according to a press release from the Sheriff’s Department Information Bureau.

“In the early morning hours of Thursday, October 23, 2014, a Sheriff’s Special Enforcement Bureau, Special Weapons Team, served a search warrant at the 34000 Block of 175TH Street East, Llano, as a result of a long term investigation by Sheriff’s Narcotics Bureau Detectives,” the press release states.

“Detectives on scene found a large amount of narcotics, multiple rifles and handguns, as well as evidence to suggest the resident was manufacturing explosives. The male suspect at the location was arrested and transported to Palmdale Sheriff’s Station where he was booked on narcotics and receiving stolen property charges. He is being held in lieu of $50,000 bail,” the press release states.

The suspect was identified as 54-year-old Robert Webster, according to the Palmdale Station jail.

The Special Enforcement Bureau Thursday morning posted a photo on Twitter from the location (see below). Officials later said they were trying to determine what the device was. 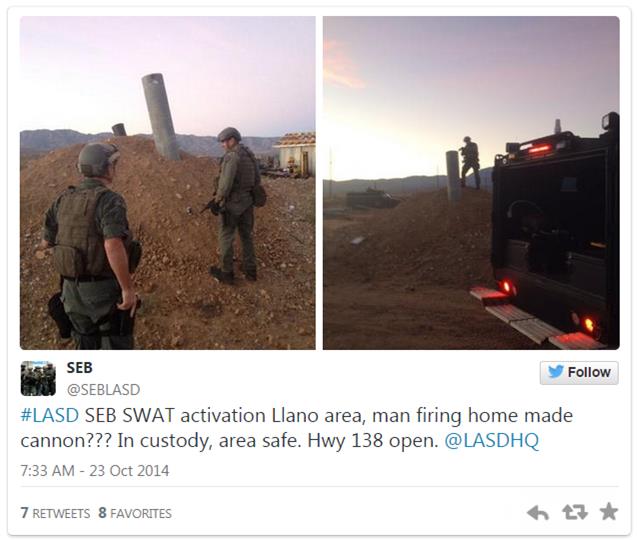 1 comment for "Drugs and guns seized in Llano raid, 1 arrested"