A team of approximately 20 students, including engineering, marketing, drive, and design specialists from The Academy, attended the competition in Placentia. The two day-long events presented a demanding engineering challenge for Gryffingear, which was one of only four teams to register two robots in the competition. The two robots were Golden Snitch, which made it all the way to World Championships last year, and Basilisk, a robot re-build challenge that students completed over the summer. 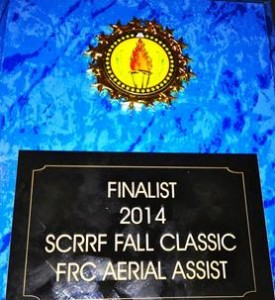 In Saturday’s competition, Basilisk finished the qualifying rounds with a 2-4 record, while Golden Snitch, the team’s main robot, finished with a 5-1 record, ranking in fourth place.

At the end of qualification matches, the competition’s “Alliance Selection” allowed the top four, including Golden Snitch, to select two other robots to join them through a single elimination playoff, one of which was their other robot, Basilisk.

Golden Snitch improved to rank second in Sunday’s qualification rounds, again allowing the team to choose Basilisk and another team, to move on into the playoffs.  Saturday, Sept. 27, the teams ended their run in the semi-finals, and Sunday in the finals. They ultimately lost to some tough veteran teams and were awarded “2014 Fall Classic Finalists” plaques.