PALMDALE – A teen driver and her passenger were transported to the hospital Wednesday afternoon after the vehicle they were riding in collided with a Sheriff’s patrol car in a Palmdale intersection, witnesses said.

The deputy-involved traffic collision occurred around 2:38 p.m. in the intersection of Sierra Highway and Palmdale Boulevard.

Sheriff’s officials have released little details about the crash; however, witnesses at the scene said a Honda Accord traveling eastbound on Palmdale Boulevard crashed into a patrol car that was headed southbound on Sierra Highway.

A man at the scene said his daughter was driving the Honda involved in the collision. The man said he’d rushed to the crash scene after his wife called him at work and told him their daughter had been involved in a crash. 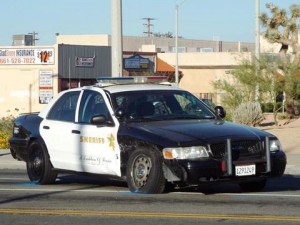 He said investigators at the scene informed him that his daughter, her male passenger, and the deputy involved in the collision had all been transported to the hospital.

The man said he was worried about his daughter because she was an unlicensed driver just three days short of her 18th birthday.

This information could not be confirmed with detectives at the scene. No further information was immediately available Wednesday evening.

Traffic was diverted for several hours to allow for the investigation.

UPDATED 9/25/14: All three parties are doing okay and suffered no serious injuries. The Honda’s driver claims her light was green and she was driving the speed limit, while the patrol car was traveling through the intersection without its sirens activated, according to an online message.

52 comments for "Vehicle collides with patrol car in Palmdale"