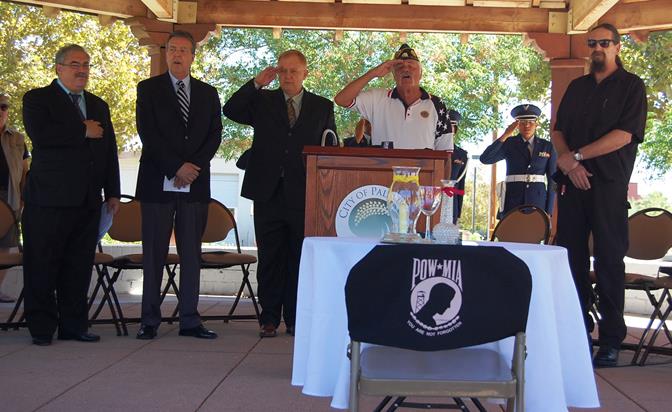 PALMDALE – Palmdale joined cities across the country Friday in recognizing and honoring the sacrifices of prisoners of war, those still missing in action and their families.

Titled “You Are Not Forgotten,” the Palmdale ceremony was held at 11 a.m. at Poncitlán Square and drew about 30 attendees.

“Imagine if you had a family member that was still missing in action, or a POW somewhere in the world,” Palmdale Mayor Jim Ledford told the gathering. “I can’t imagine having to live with that reality, and that’s why we need to walk the talk… to step up as a community, collectively, and say, ‘we’re here to support you, and we understand your challenge.’”

More than 83,000 Americans are missing from World War II, the Korean War, the Cold War, the Vietnam War and the 1991 Gulf War, according to the Department of Defense.

National POW/MIA Recognition Day is observed on the third Friday of September, and it’s a time to pay tribute to those men and women and to highlight the government’s commitment to finding them and bringing them home.

Sights from the local POW/MIA ceremony

POW/MIA Recognition… by the Dept. of Defense