“I’m sure that one of the topics will be the resizing of the organization,” Carol Stevenson, vice president of Kevin/Ross Public Relations, told The AV Times, while noting that Knox periodically holds these employee meetings to inform personnel about hospital-related news.

A flyer circulated among hospital staff invites employees to join both Knox and the “Executive Management Team for an informative hospital update and Q&A session.” The informational sessions are scheduled to take place in the auditorium of the Community Resource Center on Friday, Sept. 19, at 44151 15th Street West in Lancaster. 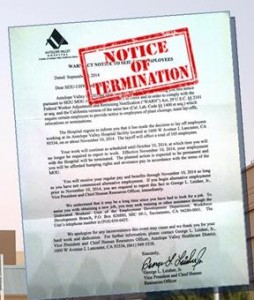 Nearly 100 employees at Antelope Valley Hospital were given notice last week in what administrators are portraying as a cost-saving measure for the health care facility.

Employees received a termination letter on Sept. 9, warning the layoff will affect a total of 105 employees. The letter informs its recipients that their final workday will be Oct. 10, and that they will continue to receive regular pay and benefits up to Nov. 10, the effective date of their termination. [View the termination notice here.]

Vladimir Dominguez, SEIU-UHW (United Healthcare Workers West) administrator, said his union is responding to the announced layoffs by planning an informational picket for Wednesday, Sept. 24, from 11 a.m. to 2 p.m. at Antelope Valley Hospital.

In a flyer currently being distributed to hospital employees, Dominguez explains that patient care will not be impacted during the informational picketing event, and that SEIU-UHW members will picket in their off time during their lunch or breaks.

“A picket is not a strike,” the flyer states. “No one will be refusing to go to work, and we will explain to patients why we are there.”

The SEIU-UHW also reacted with a formal notification to hospital officials to bargain over reduction in force for all non-nursing healthcare workers affected by the announced layoffs. [View it here.]

The Sept. 11 letter from Dominguez states that the “layoffs commencing Oct. 10, 2014 … will affect at least 74 bargaining unit members; and since the Union was not officially notified until the very day the layoff letters were received by the intended recipients (Sept. 10), the Union hereby notifies you that you must, under the MOU and the law, cease and desist with the layoffs until which time the Hospital can have meetings and discussions with the Union to bargain over the proposed layoffs.”

Stating that the SEIU-UHW does not believe the layoffs are necessary, the union is making itself “available to bargain over the layoff and all the affected bargaining unit members on Sept. 18 and 19, 2014 at any time.”

Dominguez confirmed in an email to The AV Times that the union is prepared to meet with hospital administrators on Thursday, Sept. 18 at 1 p.m. at the Foundation office, located at 1206 W. Avenue J, Suite 202.

The California Nurses Association also responded to news of the layoffs last week with a pamphlet saying that “contrary to what they are telling all of you, CNA had no notice the hospital intended to lay off any nurses,” while explaining that the nurses’ union was told Sept. 10 of the hospital’s intention to lay off registered nurses. [View it here.]

The CNA stated in the pamphlet that they have sent administration officials a “Demand to Bargain” along with a “Notice to Cease and Desist Change in Working Conditions.”

Union representatives are concerned that the administration’s resizing decision in essential service areas, such as Respiratory, Phlebotomy, EKG and Monitor Techs, will jeopardize quality of patient care.

Hospital administrators have indicated they are cutting jobs because of the hospital’s financial troubles – mostly from having been shorted about $6 million in anticipated government reimbursements for services it provided nonpaying hospital patients, according to recent publicly disclosed statements by officials.