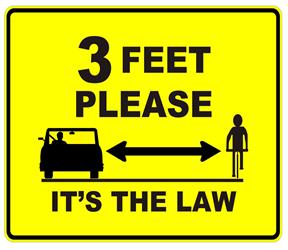 On Tuesday, Sept. 16, the “Three Feet for Safety Act” goes into effect. The new California law aims to keep cyclists safe by requiring motorists to stay at least three feet away when passing a bicycle that is proceeding in the same direction.

“If the driver of a motor vehicle is unable to comply … due to traffic or roadway conditions, the driver shall slow to a speed that is reasonable and prudent, and may pass only when doing so would not endanger the safety of the operator of the bicycle, taking into account the size and speed of the motor vehicle and bicycle, traffic conditions, weather, visibility, and surface and width of the highway,” the law states. [View the full text here].

Drivers who fail to give at least three feet of clearance when passing bicyclists may face a $35 fine; and if the offense results in a collision causing injury to the bicyclist, a $220 fine shall be imposed on the driver, according to the new law.

The California Highway Patrol has launched a “Three Feet for Safety Act” awareness campaign with tips for motorists and bicyclists to stay safe and uninjured on the roadways.

Expect people bicycling on the roadway. Bicyclists have the right to use all roads except those from which they are officially excluded.

Look for people bicycling. When preparing to enter the roadway or make a turn, look carefully for oncoming bicyclists. Many bicyclists are capable of speeds in excess of 25 miles per hour.

Give at least three feet. Do not overtake or pass a person bicycling too closely. California law requires a standard minimum distance of three feet between any part of the motor vehicle and any part of the bicycle or its operator.

Have patience. Be aware that when a lane is too narrow for vehicles and bikes to be safely side by side, bicyclist should ride in or near the center of that lane to discourage motorists from unsafe passing.

Tips for bicycling on the road:

Go with the traffic flow. Ride on the right in the same direction as motor vehicle traffic. Go with the flow, not against it.

Obey all traffic laws. Stop at red lights and stop signs and yield to pedestrians.

Be predictable. Ride in a straight line, not swerving in and out between parked cars. Signal your moves to motorists, other bicyclists, and pedestrians to let them know what to expect.

Increase your visibility. Wear fluorescent or brightly colored clothing during the day, dawn, and dusk. When you ride at night, you must have a white headlight and red lights or reflectors on the back of your bike, white or yellow reflector on each pedal or a bicyclist’s shoe or ankles, and side reflectors (unless the bicycle is equipped with reflectorized tires.). (CVC 21201)

Stay alert at all times. Use your eyes and ears. Watch out for potholes, cracks, wet leaves, storm grates, railroad tracks, or anything that could make you lose control and fall. To be able to listen for dangerous situations, do not use headphones or earplugs in both ears while riding. (CVC 27400)

Look before turning. When turning or changing lanes, always look behind you for a break in traffic, signal, and then check again before making the turn. As you approach intersections, be aware of the people behind, beside, and in front of you who may try to cross your path. Watch out for left or right-turning traffic; these are the most frequent motorist-caused bicycle crashes.

Watch for parked cars. Ride far enough out from the curb to avoid the unexpected from parked cars (drivers may pull out in front of you or open a door in your path.)

Give and get respect. Allow faster traffic to pass when it’s safe; avoid needlessly blocking the road.

For more information on the “Three Feet for Safety Act,” visit the California Department of Motor Vehicles online.

[Information via press release from the California Highway Patrol.]