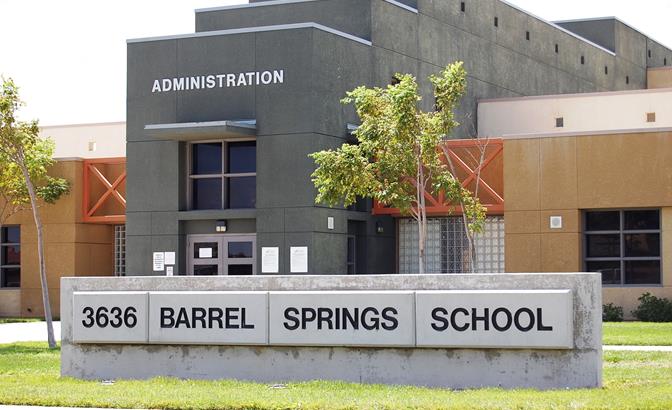 Editor’s note: On the first day of school at Barrel Springs Elementary in Palmdale, two students went missing. The school bus was late in transporting students home, so the two students – ages 6 and 9 – left school premises and began walking home.  The young students were eventually found; but the ordeal was a nightmare for two local families. They blame Barrel Springs Elementary for not properly supervising its students and say the situation was mismanaged by school staff. The two mothers want to share their stories with the community. Read them below…

On August 11, 2014, what was supposed to be a happy back-to-school day became two families’ nightmare.

How is a 6 and 9-year-old able to leave school 30 minutes after the bell with no adult supervision? These children were supposed to be picked up by the Antelope Valley School Transportation bus by 2:30 p.m.

Worried parents waiting for their children’s arrival on 25th street east began calling the school but got no answers. After several phone calls, the office receptionist finally answered saying, “the buses haven’t even loaded”.

Being the worried mother that I am, I drove down to the school to pick up my child… only to find out he went missing! The principal and the school staff had no idea my child and another student had gone missing.

I spent 20 minutes frantically searching the school campus for my child, with no help from the principal or the office staff.  I requested the Sheriff’s Department to be contacted, and the principal hesitated.   After multiple requests, she finally made the call, and a tactical team was dispatched to search for my child and the other student.

All the while, the principal and other office staff shared giggles and conversations with each other. Snide remarks were made to the parents of the other missing student after they asked why there wasn’t enough adult supervision. They were told, “Maybe you should go apply at the school district and help us out”.

After the principal and office staff laughed in our faces, the other mother and I had to ask our friends and family for help searching the local neighborhoods for our children. A long 30 minutes later, I received a phone call that my son and the other student were found. The boys said they were told that the bus had left without them, and the office staff was not allowing them to call home, so they decided to walk home. As frightened as they were, they felt that they had no choice but to walk home down one of the most dangerous highways – Pearblossom Highway. They crossed through the desert in 100-degree weather!

After complaining to outside resources, I was rejected and told the situation could only be handled if something was to happen to my child.  It shouldn’t take a missing child or anything worse to happen for more supervision at our local elementary schools!

Monday, August 11, 2014, around 2:45 p.m., I was waiting for my son to arrive home from school on the Antelope Valley Transportation bus, but the bus never arrived. After calling the school to see what was going on, the receptionist finally answered and said the bus driver was running late.

I drove straight to the school to get my son when I heard the news. When I arrived, I was relieved to see all the other kids who get off at the same bus stop as my son.  I saw only one staff member there with about 12 other kids, and I told her that I was there to pick up my son.

I told her his name, and she called out for him but he was not there. I walked to the office to see if he was in there. I looked everywhere I could, but my son was nowhere to be found.  I started asking questions. WHERE IS MY SON?

The principal started having her staff members call out his name on the loud speaker. While that was going on, I was asking her why she couldn’t locate my son. She had no answer except to say that it’s after school and sometimes kids leave. My son is only 6 years old; you don’t just let a child leave!

I then saw my son’s friend who lives next to us, and I asked him if he had seen my son. That’s when I was told that my son and another kid left the bus line, where they were to stay until getting on the bus. All the kids saw them leave. How is it that all the other kids saw them leave, but the staff didn’t?

I called my husband, and he rushed to the school. He was mad, and he began to ask questions, but we could not get answers. The principal was trying to calm him down, while the receptionist was smiling and laughing. He told them the school needed more eyes and staff members. With a big smile on her face, the receptionist commented back, “If you want that, go to the school district and see about getting a job.”

Who wants to hear comments like this when your kid is missing? After a while, we got word that the kids were walking home on 25th Street East. They made it home safely, but my question is: WHAT IF?

Editor’s Note: The AV Times spoke with Palmdale School District Superintendent Raul Maldonado. Maldonado said the Barrel Springs Elementary School principal notified him of incident on the day it happened. He acknowledged that there was some confusion at the school Monday afternoon, as is sometimes the case on the first day of school. The situation is being addressed, Maldonado said. He met with the parents of the two students on Tuesday to promptly address any concerns and to assure them that student safety is the number one priority of the Palmdale School District, Maldonado said.