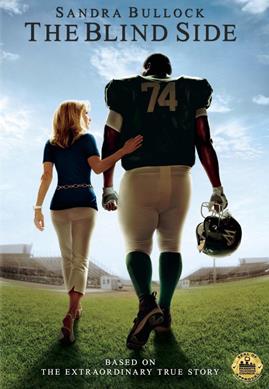 PALMDALE – The City of Palmdale’s popular “Family Movie Night” continues this Friday, Aug. 8 at Palmdale Amphitheater with The Blind Side.

Tickets for Family Movie Nights are $2, with kids 12 and under admitted free. The gates will open at 6:30 p.m.  and the movie will start at dusk. Moviegoers are allowed to bring a picnic dinner and non-alcoholic beverages to Family Movie Nights.

The Blind Side, starring Academy Award® Winner for Best Actress Sandra Bullock, is based on an extraordinary true story that features Michael Oher (Quinton Aaron), who knows little about family, and even less about football. What the homeless teen does know are the streets and projects of Memphis. Well-to-do Leigh Anne Tuohy (Sandra Bullock) knows little about his world. Yet when she and Michael meet, he’s found a home. And the Tuohys found something just as life-changing: a beloved new son and brother. This real-life story unveils the remarkable journey of a college All-American and first-round NFL draft pick who was a winner before he ever stepped onto the playing field.

Other movies in the Family Movie Nights series include Harry Potter & The Sorcerer’s Stone on Friday Aug. 15, featuring a concert performance by West Coast Classical Orchestra before the movie; and Finding Nemo on Friday, Aug. 22.

In Harry Potter & The Sorcerer’s Stone, a three-time Oscar nominated film adaptation of J.K. Rowling’s bestseller, Harry Potter learns on his 11th birthday that he is the orphaned son of two powerful wizards and possesses magical powers of his own. At Hogwarts School of Witchcraft and Wizardry, Harry embarks on the adventure of a lifetime. He learns the high-flying sport Quidditch and plays a thrilling game with living chess pieces on his way to face a Dark Wizard bent on destroying him.