Deputy Jared Fletcher was recognized for pulling two people from a burning vehicle this past October. According to a Sheriff’s Department press release:

With the assistance of another motorist, they located a male passenger trapped beneath the dashboard. The vehicle fire continued to spread as Deputy Fletcher and the motorist struggled to free the trapped passenger. After several minutes, they were able to free the man and move him to safety.

There is no doubt the unselfish act and disregard for his own safety Deputy Fletcher displayed saved the lives of both occupants.

Lancaster Station Deputies Michael A. Gelardo and Estevan Perez were recognized for saving a victim from a drug overdose this past September. According to a Sheriff’s Department press release:

On September 1, 2013, Deputies Gelardo and Perez, assigned to Lancaster Station, responded to a person down call. When they arrived at the scene, they encountered a female juvenile performing chest compressions on the victim, who was nonresponsive and had no pulse due to a drug overdose.

Without the decisive and lifesaving actions of Deputies Gelardo and Perez, the victim might have perished from the overdose. 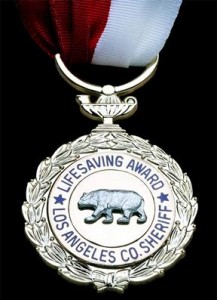 The three Lancaster Station Deputies were honored by Sheriff John L. Scott with the Department’s Lifesaving Award. The award is given to employees or Reserve members of the Department whose actions result in the saving or preservation of a human life, which would have otherwise been lost without the employee’s direct involvement.

Assistant Sheriff Todd Rogers, who narrated the ceremony said, “It was my honor to be part of the Lifesaving Award ceremony. The stories we heard are representative of the heroic work done by the members of the Los Angeles County Sheriff’s Department every day.”

To read the lifesaving stories of the 18 other honorees from Sheriff’s substations across Los Angeles County, click here.