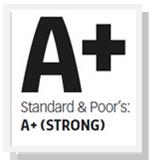 PALMDALE – Standard & Poor’s Ratings Services, one of the world’s leading providers of independent credit risk research and benchmarks, has completed its periodic review of the City of Palmdale’s finances and affirmed the City’s current “A+” issuer credit rating (ICR), with a stable outlook based on Standard & Poor’s local GO criteria.

The rating agency applied its updated rating criteria in completing its analysis.  Standard & Poor’s affirmed the City’s current “A+” rating on its outstanding certificates of participation and lease revenue bonds under the new criteria, which takes into account such components as the local economy, management and financial management policies and practices, budget flexibility, budgetary performance, liquidity and debt and contingent liabilities.

Standard & Poor’s also affirmed its ‘A’ long-term rating and underlying rating (SPUR), with a stable outlook, on previously issued certificates of participation (COPs) and lease revenue bonds issued by Palmdale Civic Authority and Palmdale Financing Authority and supported by the city.

The report describing the rating agency’s comments in each of these areas may be found on the Standard & Poor’s Web site, www.standardandpoors.com/ratings, or may be obtained from the City of Palmdale.

“Despite enduring one of the worst economies since the Great Depression, the City of Palmdale has consistently demonstrated the ability to take a prudent and responsible in managing the City’s finances,” said Palmdale Mayor Jim Ledford. “We have been able to provide a high level of programs, services and amenities in spite of economic challenges. Our fiscal house is in order and that is a great message to share with new businesses, manufacturers, retailers and investors who are looking for the right place to grow. I commend City Manager Dave Childs and his team who understand and show daily how to be good stewards of taxpayer dollars.”

“Thanks to the leadership, wisdom and direction of our Mayor and City Council, we have been able to navigate through turbulent waters and come through stronger than before,” said City Manager Dave Childs. “We are on a real path to fiscal sustainability, which bodes well for our community. Our finance team deserves a lot of credit for implementing this approach as we move forward in building a strong future for Palmdale.”

3 comments for "Palmdale earns “A+” rating from Standard & Poor’s"