“The purpose of this is to raise awareness in the community about the overcharging of felonies that’s taking place in the Antelope Valley,” said local NAACP President V. Jesse Smith, adding that the issue affects people of all races. “Everybody that goes through this criminal justice system is affected in some form or fashion, and what we want to do is send a clear message to the power structure that you’ve got to stop overcharging people with felonies because it’s ruining their lives and their record.”

The “Balancing the Scales of Justice” march and rally began around 11 a.m. at the Antelope Valley office of County Supervisor Michael Antonovich. The group then marched about a mile to the courthouse chanting call and responses, including: “Whose court house? Our court house!” and “No more felonies! We need jobs!”

At the head of march, four protesters carried a “coffin.”

“The coffin is significant because so many lives have been destroyed here,” Smith said, adding that the coffin was supposed to represent buried injustices. “It’s time to unbury those injustices, to bring them out and disclose them to the public,” he said.

Smith claimed local prosecutors routinely charged defendants with far more than they could prove to put maximum pressure on defendants to agree to plea bargains.

“This is why more than 95% of all criminal cases end in plea bargains,” Smith stated.

Xavier Flores, local chapter president of the League of United Latin American Citizens, claimed there was racial discrimination in the judicial system.

“It’s discriminatory at every step of the way, and this has been found time and time again,” Flores said, citing Department of Justice investigations at the Ventura and San Fernando courts.

“Essentially what they found in both instances was discrimination against minority community residents at every point of contact with the judicial system…” Flores said. “I’ve been privy to this for the last 30 years, and it’s extremely saddening for someone like myself to see that, after 30 years, things have not changed.” [Read Flores’ written statement here.] 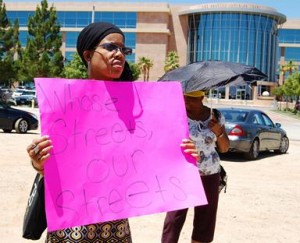 Smith said the message was not about protecting criminals, but about meting out justice with fairness and decency.

“We know that there are people that do crimes, certainly they need to do the time,” Smith said. “But it ought to be tempered with love, justice and mercy. They’re not doing that right now, and that’s why we’re out here making sure that they will.”

Asked about the next step, Smith said the group was trying to set up a meeting with the Los Angeles County District Attorney.

“To specifically deal with low level felonies,” he said. “Let’s try to reduce them to misdemeanors or let’s try to work out a program where these felonies do not stay on their records… and it will be possible for them to continue on with their lives.”

According to literature distributed at the rally, the group is calling for:

71 comments for "Rally aims to “balance the scales of justice”"