LANCASTER – Strong gusty winds whipped across the Antelope Valley Saturday causing problems for drivers. In one incident, an SUV jumped the sidewalk and plowed into the side of a Cinemark Movie Theater.

The single-vehicle collision happened around 5:05 p.m. on Valley Central Way and Lancaster Boulevard, according to Deputy Moreno of the Lancaster Sheriff’s Station. 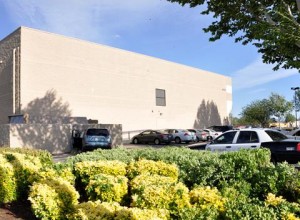 “It went through the bushes and then hit the west side wall of the movie theater,” Moreno said.

A trash compactor along the west side wall kept the vehicle from crashing full on into the movie theater.

The driver, 19-year-old Gabriel Jackson, complained of pain to his back, legs, left arm and chest, and he was transported to the hospital, Moreno said.

Jackson was also cited for being an unlicensed driver, Moreno added.

A wave cloud developed over the Antelope Valley Saturday, which helped to drive strong and gusty winds to high wind warning levels, according to the National Weather Service.

“Palmdale airport reported a peak wind gust of 64 mph with sustained winds of 53 mph at 6:43 p.m.,” according to a weather advisory.

Gusty winds should continue in the Antelope Valley through Sunday evening, the National Weather Service stated.