PALMDALE – A 21-year-old man was shot in the face outside a Palmdale liquor store Thursday night, authorities said.

The shooting happened around 9:30 p.m. at Pyramid Liquor, located in a strip mall on the 1600 Block of East Palmdale Boulevard.

“A call came in of a male gunshot victim. Deputies responded to the scene and found the victim,” said Lt. Lecrivain of the Palmdale Sheriff’s Station. “The victim was transported to the hospital and he is alive.”

Lecrivain confirmed that the victim was found outside of the location and had been shot in the face, but could not give specifics on the victim’s condition as of Friday.

The shooting was not the result of a robbery, Lecrivain said, adding that she could not divulge any further details because the incident was still under investigation.

No suspects were in custody as of Friday morning, Lecrivain said.

A Palmdale Sheriff’s Station broadcast Thursday night stated that the victim had been confronted by a group of males, and that deputies were searching for four Hispanic males in connection with the shooting.

No further details were available Friday. 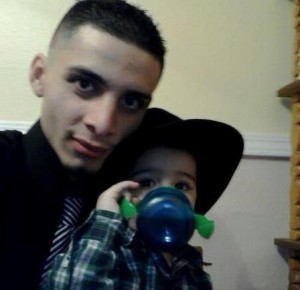 Close friends have identified the victim as Daniel, and they say the 21-year-old is an amazing father to his young son. Daniel and his brother were standing outside the liquor store talking to a homeless man when the shooting occurred, his close friends say.

Daniel was shot in the face with a shot gun; he is currently in critical condition and the prognosis is not good, his close friends say.

This information has not been confirmed by sheriff’s officials. We will continue to follow this story.

Daniel Pensamiento-Galdamez was pronounced dead around 9:16 p.m. Saturday, April 19, at Antelope Valley Hospital, according to Assistant Chief Ed Winter of the Los Angeles County Coroner’s Office. His autopsy is still pending, however, Daniel sustained a gunshot wound to the face, Winter said.