PALMDALE – “Keep Christopher Hubbart away from the Antelope Valley!” That was the clear message sent by local residents gathered for a press conference outside the Palmdale Sheriff’s Station Friday.

“We’re coming together as a community in unity to make sure that our voices are heard. We don’t want Christopher Hubbart in the Antelope Valley or anywhere else in the High Desert,” said Dr. Miguel Coronado.

Coronado organized the gathering of about three dozen mostly female residents and community leaders, from across the Antelope Valley, to protest the proposed release of the serial rapist.

Hubbart may be housed at 20315 East Avenue R when he is conditionally released, according to Santa Clara County Judge Gilbert Brown. There is no date scheduled for Hubbart’s release, but a public hearing on his proposed residence will be held next month in San Jose.

Hubbart admitted to raping approximately 40 women between 1971 and 1982. He was called the “Pillowcase Rapist” because he muffled his victims’ screams with a pillowcase over their heads. View a timeline of Hubbart’s criminal, social, and legal history here.

Despite his heinous crimes, Hubbart was granted a conditional release last year to Los Angeles County. He was originally slated for release to an Antelope Valley home at 17132 Laredo Vista Avenue, but the property owner withdrew his property amid public outcry.

“This is frustrating… we’re tired of it!” Navarrete said, adding that she and other women in her neighborhood were terrified and living in fear.

For Lancaster teen Amber Broaden, the situation hits especially close to home.  Broaden said she was raped as a young child by a predator who lived down the street.

“I’ve recovered as much as is possible to recover from my experience, and right now I’m more worried about the other people in my community,” Broaden said. “It’s a threat to have [Hubbart] out here, and I’m committed to making sure that he is not in our community at all.”

Palmdale resident Cynthia Beverly said she too was raped, at gunpoint, and she’s dealt with it every day of her life since it happened.

“If we can come together, every faith, and hold hands, stand together and put our voices up in prayer, it is amazing what things can happen,” Granai said.

“To provide women with the education [necessary] to be able to get out of these situations,” Rodriguez said Friday. “It’s for anybody in the Antelope Valley that wants to come and take the class.”

For more information on the upcoming self-defense classes, contact Valley Oasis at 661-949-6143. 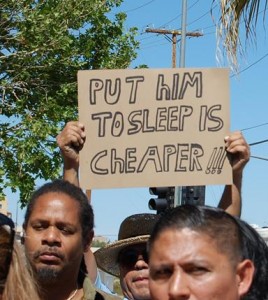 Most important, they’re encouraging residents to put their concerns in writing to the judge who granted Hubbart’s conditional release. Judge Brown will hold a San Jose public hearing on May 21, 2014 on Hubbart’s proposed residence.

The public has until May 16 to submit written public comments to Judge Brown by email to HubbartLASafetyTaskForce@da.lacounty.gov or by mail to:

For more information on local efforts and events aimed at blocking Hubbart’s release to the Antelope Valley, contact Dr. Miguel Coronado at (661) 466-6810 or email Agentsofchange13@gmail.com.

‘Pillowcase Rapist’ may be released in Palmdale area

Serial rapist could relocate to the AV this year

10 comments for "Residents rally to keep serial rapist away"