PALMDALE – City of Palmdale officials, developers and representatives from several retailers gathered Thursday to celebrate the groundbreaking of Palmdale’s newest shopping center, which will be the new home for Chick-fil-A, Krispy Kreme, Yogurtland, The Habit, and international grocery chain Aldi.

“We are thrilled to have these great new retailers coming to Palmdale,” stated Palmdale Mayor Jim Ledford. “They each will be very well received by the residents of the Antelope Valley. This is the sort of thing that encourages even more new businesses to come to Palmdale.”

The new center, developed by Fountainhead Development of Newport Beach, is located on Rancho Vista Boulevard near 10th Street West (where Dunn Edwards Paint is currently located). The center will comprise of 10 stores with a combined 45,400 square feet of space. There will be two large buildings, with Chick-fil-A in its own free standing structure on the east side of the property. 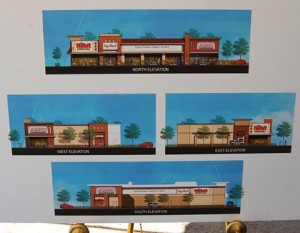 Dunn Edwards Paint will move into a new building when construction is complete.

Most of the stores will open in time for the upcoming holiday season, said Fountainhead Development CEO Craig Smith.

He said Fountainhead Development had been working with the city of Palmdale for nearly two years on the project.

“There was a lot of background that went into getting to where we are, but I’ve got to say the city has just been wonderful… Working with the city of Palmdale has been a completely professional experience,” Smith said.

More on the new tenants

Credited with introducing the original boneless breast of chicken sandwich, Chick-fil-A, Inc. is one of the largest privately-held restaurant chains – with more than 1,700 restaurants in 39 states and Washington, D.C. (as of March 2013). Read more at www.chick-fil-a.com.

The original Habit Burger Grill opened its doors in Santa Barbara in 1969, and has since expanded to more than 30 locations all over California. Read more at www.habitburger.com.

In 2006, Yogurtland opened its first location, offering quality frozen yogurt made from real California milk and served with a wide array of premium, popular toppings. Yogurtland now has 270 locations across the United States, Australia, Guam, Mexico, Venezuela and Dubai. Read more at www.yogurt-land.com

Headquartered in North Carolina, Krispy Kreme was founded in 1937. Today, Krispy Kreme can be found in over 800 locations in more than 20 countries around the world. Read more at www.krispykreme.com.

Since it was founded in 1925, Dunn-Edwards has provided more than 450 million gallons of paint to the region – enough to cover more than 6,000 square miles of surface area. Dunn-Edwards paints are manufactured exclusively in the Southwest and formulated specifically for the climate of the Southwest. Read more at www.dunnedwards.com.