LANCASTER – Dozens of students and teachers gathered in front of Eastside High School Saturday to remember Gage Rossi, the freshman hit and killed by a car as he crossed the street to catch his bus to school.

Gage was a confident, easygoing 14-year-old who loved to play the guitar and had many friends, those that knew him said.

“One time when he came in class, he made a leap for a chair and he missed, and that was just his way of clowning around,” said Gage’s biology teacher Park Mickelson. “Another way that I remember him is when he brought in his guitar and played ‘Smoke on the Water’, and that was just a fantastic, fantastic thing,” Mickelson continued. 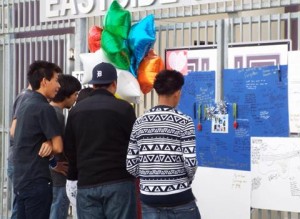 Gage was crossing Avenue J to get to the school bus, when he was struck by a car that was passing the school bus, according to a California Highway Patrol report.  Read more details of the collision here.

“This was preventable,” Gage’s mother, Laura, said at Saturday’s vigil.

Laura said she had asked to have the bus rerouted so Gage wouldn’t have to cross the 55 mph street to get to his bus stop, but she was told there was no money in the budget. 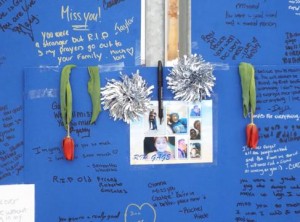 “There’s just no reason he should have had to cross that street in the dark to get on that bus when there’s plenty of room on the other side of the street… it’s just ridiculous,” Gage’s father, Dean Rossi, said.

Antelope Valley Schools Transportation Agency did not return calls for comment, but they released a statement saying they were conducting “a thorough in-house investigation” and would respond accordingly.

“Something about that needs to change, a law or a policy,” Laura said. “Other than that, my heart feels so big right now, because I didn’t know my son was so popular and so loved by so many people.”

“He didn’t pretend to be anything he wasn’t, he just was himself, confident in himself, and because of that, I think he had so many friends,” Gage’s mother continued. “If people could just honor his memory by driving a little safer, a little slower… and keep your eyes out.”