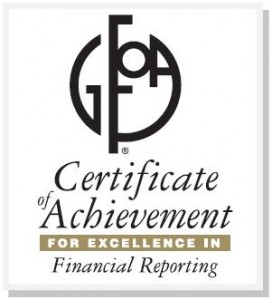 PALMDALE – The City of Palmdale has been awarded the Certificate of Achievement for Excellence in Financial Reporting by the Government Finance Officers Association of the United States and Canada (GFOA) for its comprehensive annual financial report (CAFR) for the fiscal year ending June 30, 2012.

“The City’s Finance Department is honored to be part of GFOA a distinguished group of professionals and to have received their vote of confidence is an accomplishment in itself,” said Palmdale’s Finance Manager/City Treasurer Karen Johnston. “This is a team effort performed annually that involves not one individual but all departments within the City.”

Palmdale’s “CAFR has been judged by an impartial panel to meet the high standards of the program including demonstrating a constructive ‘spirit of full disclosure’ to clearly communicate its financial story and motivate potential users and user groups to read the CAFR,” according to a written statement issued by GFOA.

According to the GFOA, the award “reflects the commitment of the governing body and staff to meeting the highest principals of governmental budgeting.” In order to receive the budget award, Palmdale had to satisfy nationally recognized guidelines for effective budget presentation, including proficiency as a policy document, financial plan, operations guide and communications device.

“For 23 years in a row, Palmdale has been honored by the GFOA with a Certificate of Achievement,” said Palmdale’s City Manager Dave Childs. “We value fiscal excellence, and to be recognized by such an esteemed organization is an honor that not only our staff, but our residents can be proud of.”

The City of Palmdale’s Finance Department is responsible for overall financial planning for the City, revenue administration, and budget control. The department also provides payroll services, purchasing, administration of the City’s outstanding debt obligations, and acts in a fiduciary capacity for four assessment districts and three community facilities districts. The department also assists the City Manager in the preparation of the annual budget, invests City funds for both short and long-term purposes, and provides cash management for the City.