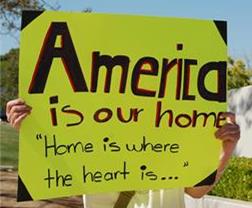 PALMDALE – Dozens of immigration reform supporters will rally in Palmdale on Saturday as part of a final surge of activities to push Congressman “Buck” McKeon (CA-25) toward decisive action on immigration reform before the year’s end.

The rally kicks off at 9 a.m., Saturday, Dec. 7 at St. Mary’s Catholic Church, located at 1600 East Avenue R-4 in Palmdale. It will feature supporters from the L.A. County Federation of Labor, Californians for Humane Immigrant Rights and Leadership Action (CHIRLA) Fund, AFSCME, and other groups.

Following the rally, attendees will hit the doors in McKeon’s district to urge voters to call the congressman and encourage him to support H.R. 15, the immigration reform bill that was introduced by House Democrats.  [Read more about the bill here.]

These efforts are part of the ‘Cost of Inaction’ campaign, which has brought together community, labor, faith and immigrant rights groups as part of a grassroots voter contact campaign in nine targeted Congressional districts nationwide, organizers stated in a press release.

McKeon’s district, which includes Palmdale, Lancaster, Santa Clarita, and Simi Valley, is made up of 31.5 percent Latino voters. Recent polling conducted by Magellan Strategies indicated that 73 percent of likely voters in this district are in support of comprehensive immigration reform that contains provisions like those found in H.R. 15, according to organizers of the rally.

(Information via press release from the American Federation of Labor and Congress of Industrial Organizations.)