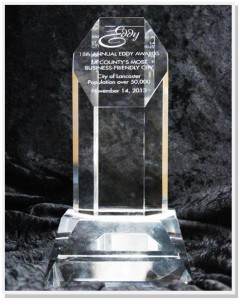 LANCASTER – The City of Lancaster was named “Most Business-Friendly City” at the Los Angeles County Economic Development Corporation’s 18th annual Eddy Awards Thursday evening. Lancaster is the first city in the history of the program to have won the award twice, with its first win in 2007, city officials announced in a news release.

“We are deeply honored that an organization of this caliber has once again recognized Lancaster with this very prestigious award,” said Mayor R. Rex Parris. “Since 1996, LAEDC and its president, Bill Allen, have played a key role in many of Lancaster’s recent successes, including the attraction of BYD’s e-bus and battery manufacturing facilities.”

The LAEDC is the premier economic development organization in Los Angeles County, since 1996 having helped retain or attract more than 190,000 annual jobs in the County with an estimated labor income of $11.8 billion.

During last night’s ceremony, the City of La Mirada was also named Most Business-Friendly Smaller City, with a population under 50,000.

“This year’s Most Business-Friendly Cities, Lancaster and La Mirada, understand that domestic and global competition for jobs, businesses and entire industries has never been fiercer,” said Bill Allen, LAEDC president and CEO. “The City of Lancaster vigorously competes by training its residents for tomorrow’s jobs, not for yesterday’s; by keeping costs and fees down to attract new businesses and jobs; and by supporting its start-up sector, which will drive the city’s economic growth in the future.”

The winners were selected based on the following criteria:

“On behalf of the City of Lancaster, I would like to thank the LAEDC for organizing this world-class program and for honoring us with this prestigious award,” stated Parris. “We will continue to work side-by-side with our stellar business community to ensure that our city remains the Most Business-Friendly.”

29 comments for "Lancaster recognized as ‘Most Business Friendly City’"