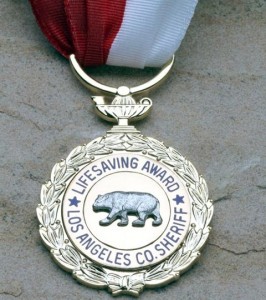 Lancaster Station Reserve Deputy Jeff J. Godde was one of 11 members of the Los Angeles County Sheriff’s Department presented with a Lifesaving Award for taking actions that resulted in the saving or preservation of a human life, authorities announced Wednesday.

The Lifesaving Awards were part of a special presentation at the sheriff’s department’s annual Valor Awards Ceremony, held Tuesday at the Quiet Cannon in Montebello.

Godde received a Lifesaving Medal for his involvement in a team effort to save the life of a Juniper Hills woman who lost control of her vehicle and tumbled down a snow-covered embankment last year. According to the Sheriff’s Department:

On March 25, 2012, Mrs. Tracy Granger of Juniper Hills, California was driving on the Angeles Forest Highway during a snow storm when she lost control of her vehicle near Mile Marker 10.47. Her vehicle slid off the roadway and down a 350-degree snow-covered embankment. Due to the rugged terrain and weather conditions, Mrs. Granger went unnoticed and lay critically injured at the bottom of the ravine. The next day her husband reported her missing and Palmdale Station personnel initiated an investigation and requested the assistance of Crescenta Valley Station personnel, including Montrose Search and Rescue Team members.

The following day a systematic search of both the Angeles Crest Highway and Angeles Forest Highway began. Over the next several hours, 100 miles of roadway were searched by both land and air.

At approximately 9:30 a.m., Reserve Deputy Johnson spotted tire marks in the snow on the right shoulder of Angeles Forest Highway. He checked the area for any signs of the victim or her vehicle, described as a white pickup truck. Because of a recent storm, combined with the white color of the vehicle, the task was particularly difficult. Reserve Deputy Johnson eventually spotted the pickup at the bottom of the canyon and immediately radioed his discovery.

Fearing for Mrs. Granger’s medical condition after being involved in a horrific traffic accident and being exposed to the elements for more than 12 hours, Reserve Deputy Johnson hurriedly descended the rugged snow-covered hillside with his medical bag and without supporting lines. He successfully negotiated a path to the bottom of the canyon and located Mrs. Granger lying outside her vehicle in the snow in extremely critical condition. He was able to detect a very faint pulse and immediately began administering emergency first aid.

A few moments later, Sergeant Slater and Reserve Deputies Moyneur and Sheedy arrived on the scene. With additional lifesaving equipment, they too descended the steep terrain without a support line and provided additional emergency medical treatment to Mrs. Granger.

Approximately five minutes later, Air Rescue 5 arrived and pilot Deputies Bogdan and Osborne safely navigated the helicopter into the rugged canyon. The Crew Chief, Deputy Airhart, lowered paramedic Deputies River and Desmarteau down to the crash scene via hoist. Reserve members Daniels, Koegler and Godde, supported by Sergeant Gallo and Deputies Martin, Diana, Burt and Volunteer Cronkhite, also arrived on scene. They worked together as a team to set up a truck-mounted winch cable to prepare for an over-the-side hoist rescue as a backup plan in the event Air 5 could not perform the rescue due to the inclement weather conditions.

Approximately ten minutes later, the Air 5 pilots decided that an air rescue was necessary due to the victim’s critical injuries. They safely maneuvered the helicopter into the canyon, and Mrs. Granger was ultimately airlifted and transported to Huntington Hospital. According to hospital personnel, the victim had “flat-lined” three times but survived due to the heroic actions of her rescuers.

For placing themselves in potential peril to save the life of another, Deputies Thomas Bogdan and Scott Osborne, and Reserve Deputies Cynthia Moyneur and Robert Sheedy were awarded the Meritorious Conduct Medal, Silver.

For placing himself in immediate peril to save the life of another, with full knowledge of the risk involved, Reserve Deputy Jason Johnson was awarded the Meritorious Conduct Medal, Gold.

Sheriff Lee Baca presented 18 members of the Sheriff’s Department with highest honors during the Valor Awards Ceremony. The Valor and Meritorious Conduct medals are awarded annually to Department members who perform acts of great bravery or heroism, above and beyond the call of duty, to save the lives of others while placing their own lives at risk.