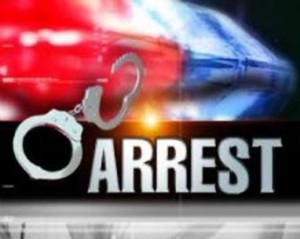 PALMDALE – A Victorville gang member on early release from prison was arrested Tuesday afternoon after a 30-minute crime spree in Palmdale, authorities said.

Gilbert Lopez, a 25-year-old “San Fer” gang member, is accused of robbing a donut shop, attempting to rob someone in a grocery store parking lot, and burglarizing a Palmdale home, according to a press release from the Palmdale Sheriff’s Station. Read it below:

At [1:25 p.m., Oct. 22], Palmdale Station received a call reporting a robbery at a “Spudnuts” donut shop [in the 2300 Block of E. Palmdale Boulevard]. The suspect, reportedly armed with a handgun, ordered the clerk from the store and took the cash register. The suspect fled in a blue pickup truck.

About 20 minutes later, the suspect and vehicle attempted to rob a victim in the parking lot of a Stater Brothers’ market approximately two miles away [in the 37200 Block of 47th Street East].

Ten minutes after that, Palmdale Station received a call from a citizen at the north end of Chaparral Elementary school. The caller reported hearing glass breaking at a residence immediately north of the school on Wesley Court [37500 Block of Wesley Court].

Deputy J. Vezina responded to the residential burglary and saw the suspect and pick-up truck described in the previous two incidents. Deputy Vezina remained at a distance while coordinating additional responding units in a containment operation.

Palmdale Station desk personnel, realizing that Chaparral Elementary School was within the containment, called and directed an immediate student lock-down.

With the suspect between the deputies and the school, responding Palmdale personnel waited and watched from a distance to allow school staff to complete the lock-down. They could see the suspect loading items from the house into the truck. When the suspect entered the vehicle and began to drive forward, the waiting units responded and detained him at gunpoint. The suspect, a “San Fer” gang member, was taken into custody without incident.

A stolen cash register was found on the floorboard of the vehicle. The vehicle was determined to have been stolen earlier in the day in a carjacking in Los Angeles Police Department’s Foothill Division area.

Deputies found additional property in the vehicle which was possibly taken in other as-yet-undiscovered burglaries. No firearm was located. At this time, investigators believe the suspect only simulated a weapon during each of the robbery incidents.

The school remained locked down for approximately 15 minutes.

The suspect had been released early from prison as part of the Post Release Community Supervision program (AB 109). The primary charge for his prison commitment was assault with a deadly weapon, 245(a)(1) PC. The case is being handled by the Palmdale Station Operation Safe Street Bureau (OSS).