I am submitting this issue to raise awareness about irresponsible dog owners. We have been asking our neighbors for a year to properly contain their pit bull. This dog is located in the area of East Avenue K and Challenger Way in Lancaster. 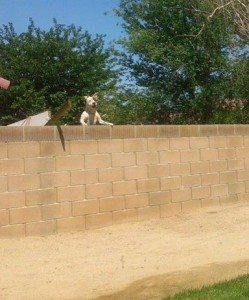 This dog will jump and lunge nonstop to an obsessive point. The pictures are of the dog jumping at the wall in my backyard. If she comes into my yard, then she can escape into the neighborhood. It will only take one time for someone to get seriously hurt.

In April, our neighbors informed us that the dog has never gotten out and that they do not lock up their dogs. That month, we were also woken up by yelling. When we entered the back yard, we were told by the owners that the dogs were fighting over food.

In June, the dog lunged over the fence and I literally had spit on my neck. They bought a kennel after hearing how I felt about almost being bit at 1 a.m. Because they bought the kennel, I cancelled the call I had put into animal control.

I am an animal lover and do not wish to see them lose the dog, but now they do not lock it up at all. Animal control said they reactivated my June complaint on September 4.

On September 8, I called back and was told there was no record [of my complaint]. I’ve called just about every day [since then] and still no response.

I spoke to a supervisor on Saturday, Sept 14, and was told an officer would respond to my house to view pictures and video. As of 7 p.m. that day there was still no response. I was told by an operator that she did not have a log of an officer responding and to call again in the morning.

I called at 9 p.m. on Sept. 16, and they said they did respond on Sept. 14. They said if the dog is still jumping over the fence, they would start another call.

So here we are again waiting for a response from animal control. Meanwhile, we’re left waiting for the dog to slip over or just attack.

The owners claim the dog has never escaped, but judging by the way they’ve blocked the fence to the front yard, I don’t believe that.

We just adopted a pit bull mix in August, and we went through an interview to make sure we were suitable. Maybe someone should interview my neighbors to see if they are suitable to keep the dogs they have.