The search warrant was served around 10:10 a.m. Thursday in the 48000 block of 105th Street East, in an unincorporated area northeast of Lancaster. The warrant was the culmination of an investigation into alleged cockfighting on the property, according to Lt. John Voza, of the Community Oriented Policing Services (COPS) Bureau.

At least 27 fighting and breeding roosters were taken from the home.

“The birds appeared to be in good shape, but had been prepped for fighting, by cutting their wattles and combs,” Voza said in a press release.

Two suspects were taken into custody for misdemeanor warrants not related to the search. Luis A. Juarez, 31, of Lancaster is being held on a “no bail” warrant, while 23-year-old Lancaster resident Richard Aguirre is being held in lieu of $31,000 bail, according to Voza.

Los Angeles County Department of Children and Family Services (DCFS) personnel were also at the location to investigate the living conditions of several children at the residence. DCFS interviewed 10 children, but did not take the children into protective custody. 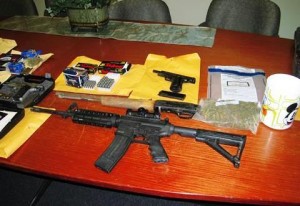 “Investigators will continue their investigation regarding the primary suspects,” Voza said in a press release.

Anyone with information about this incident is encouraged to contact the Los Angeles County Sheriff’s Department’s COPS Bureau at 323- 981-5300 or Lieutenant Lieberman at 323-627-8137.