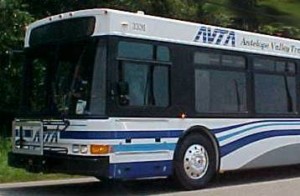 LANCASTER – Electric buses and a Bus Rapid Transit (BRT) will one day be part of the Antelope Valley Transit Authority (AVTA) service, if planning efforts continue to gain momentum.  During a Strategic Planning Workshop on July 17, the Board of Directors discussed plans to purchase two electric buses and to prepare a feasibility study for a Bus Rapid Transit route. Formal direction to pursue these projects was given to staff at the regular AVTA Board meeting of July 23.

“We are excited about both projects,” stated Executive Director Julie Austin, “Residents may see electric buses traveling along valley streets by late next year if we secure funding. The BRT, on the other hand, is a long range project that could take more than five years to implement.”

Currently, the Authority is seeking grant funding from the Federal Transit Administration (FTA) to purchase two electric buses at a cost of approximately $1.8 million.  The fuel savings is expected to offset the higher price tag associated with this new technology.

AVTA has been preparing to introduce electric buses into its fleet for the past year. Recently, they upgraded their solar power generation system by adding another transformer to harness additional electricity.  Several dozen additional solar parking panels were also installed.

The AVTA Board is now engaging in preliminary discussions regarding the development of a Bus Rapid Transit (BRT) route.  BRT is a flexible, rubber-tired rapid transit mode that combines stations, vehicles, services, running ways, alternative fare collection methods, and ITS elements into an integrated system with a strong positive image and identity. It typically travels along a dedicated guideway and is given priority passage using traffic signal priority or signal synchronization.  A BRT is considered a lower cost alternative to rail transit that offers many similar advantages such as reduced travel times, high capacity, and economic development to the communities it serves.  Discussion is now underway to study the possibility of a BRT along 10th Street West between the A.V. Mall and Lancaster Boulevard. This was one of the recommendations included in AVTA’s most recent Long Range Transit Plan, completed in 2011.

“Development of a BRT would bring a great deal of transit dollars into the region to create new jobs and enhance the vitality of our economy,” started Board Chairman Norm Hickling. “We intend to thoroughly study the service concept and seek input from the community to ascertain if there is support for this type of venture. “

AVTA plans to complete a feasibility study early next year to determine if such a project is a viable option.  In the meantime, the agency is in the process of installing an Intelligent Transportation System (ITS) that will provide customers with real time bus location information. This $2.3 million system is expected to be operational within 14 months.