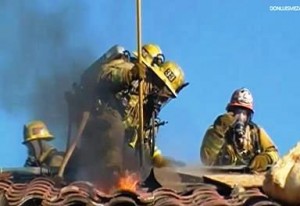 The blaze was reported around 7 a.m. at the La Quinta Apartments at 38301 11th Street East in Palmdale, according to L.A. County Fire Department Battalion Chief Larry Tucker.

“We had a structure fire in a two-story multi-family apartment complex. The fire was contained to one unit,” Tucker said. “We had seven pieces of equipment [and] 45 firefighting personnel respond. Knockdown was accomplished in about 20 minutes after the first unit’s arrival.”

The fire was caused by accidental means, Tucker said.

Several residents at the complex were forced to evacuate their apartments in their pajamas, as firefighters worked on the roof to put out the fire.

A few neighbors, who did not give their names, blamed the fire on a balcony barbecue and said the grill was too close to the wall. This theory was not confirmed by fire department officials.

The apartment was declared a total loss, and its three adult residents are being assisted by the American Red Cross, Chief Tucker said.