Holifield, 21, spent his early childhood in Palmdale and attended Antelope Valley College for one year before entering the Air force Reserve Officer Training Corps (AFROTC) and transferring to Embry Riddle Aeronautical University in 2010.

Since then, he graduated in the top 10% of the commissioning class of 2013 at Embry Riddle University with a B.S. in Professional Aeronautics and a minor in Airport Management and Aviation Safety. 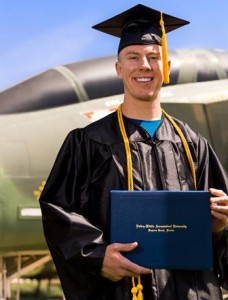 Receiving the California Air Force Association Cadet of the Year award is an honor but not the end of his accomplishments. Holifield plans to attend a year-long pilot training program at Sheppard AFB, TX.

Holifield hopes to “fly F-16s” at the end of the program and is looking forward to the challenges the next year may bring.

Last summer, he was one of 21 cadets chosen from around the nation to be a Cadet Training Assistant at Maxwell AFB, AL.

Looking back on his college experience he feels like he tasted the best of both worlds.

“It’s different from most college students because you are going through college and Air Force training at the same time,” said Holifield. “It wasn’t a secluded life, just different and you find a balance.”

When training and academics is not on his mind he likes to go to the gym and watch a game of football.

“In the next ten years I would like to have a career as a fighter pilot in the Air Force,” said Holifield.