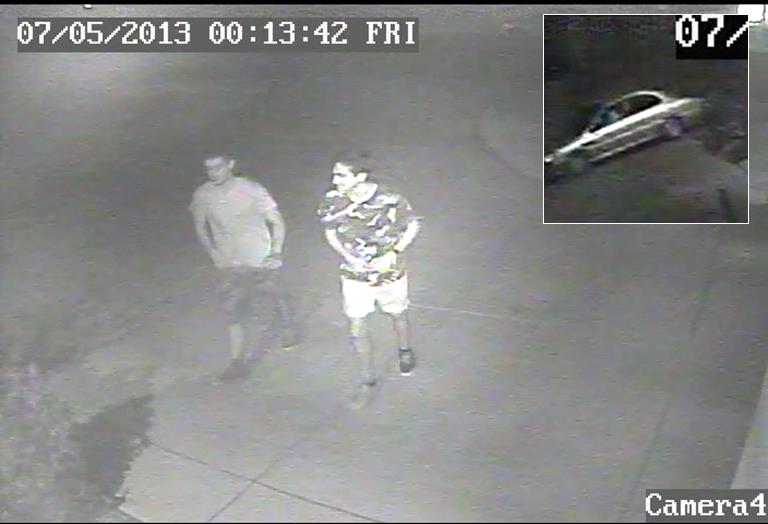 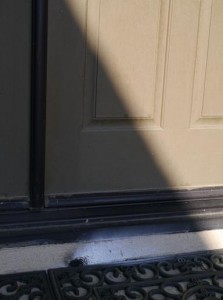 In an email to The AV Times, Moll described the incident in detail. Read it below:

“On the night of July 4th, (actually at 1:00 a.m. on July 5) two people I’ve never seen before placed a fountain type firework against my house at the front door and lit it up.  This was not the kind of firework that goes “boom” but rather the type that shoots out a sustained jet of flame that would potentially ignite something that it is placed against.

Additionally, the base of the firework was modified so that it would not stand up in the normal fashion, but it would lay flush against my house as it burned. 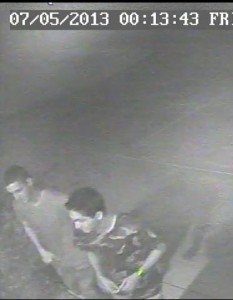 My surveillance system captured the individuals and their car.  The car appears to be an older 2-door light colored Toyota Tercel or perhaps a Ford Escort.

As you can see from the picture of the burn, it caused some damage to the outside of my home.  Under the door frame is wood so there was risk that if the flame would have been a little higher it could have ignited my house.  This would have caused a problem for me, my wife, and two little kids had we woken up [to] the front of the house on fire.

I am a Deputy District Attorney prosecuting criminals at the Lancaster Courthouse.  I don’t know [if] this is related to my job but it’s very disconcerting.

I’m including pictures of the individuals, the car they arrived in, and the burn marks on my house.  I was hoping that you could put these pictures online so that someone might recognize these two individuals and call the Palmdale Sheriff Station with that information.  A deputy did come take a report and the incident will be investigated.”

UPDATED 7/8/13: This incident is now being investigated as an arson by the Sheriff’s Department’s Arson/Explosives Detail, according to an LASD press release. Moll has also posted two videos of the incident online. View the videos below. Anyone with information on this incident is urged to contact Lt. Kennedy at the Palmdale Sheriff’s Station at (661) 272-2506.


46 comments for "UPDATED: Suspected arson at Quartz Hill home, how to help"