ANTELOPE VALLEY – Past experiences can influence a person to change the future experiences of another. At least that is the case with Lancaster resident Tyler Worthington.

Having lived through the horror of seeing his house burned to the ground 19 years ago, he knows firsthand how it feels to lose everything in a matter of minutes.

Remembering the feeling of being left with nothing but the clothes on his back, Worthington empathized with residents who experienced the possibility of losing their homes to the recent Powerhouse Fire that burned over 30,000 acres.

“When I watch the news of houses burning I am overwhelmed with emotion,” said Worthington. “The smell of homes burning is the most distinctive smell and a huge emotional trigger.”

Knowing the feeling of anxiety and stress a fire can cause to nearby residents made him eager to help with evacuations during the Powerhouse Fire, Worthington said.

One of the rescue missions that Worthington became a part of was a community effort involving Lancaster residents Cindy Swanson and Travis Tango, as well as 20 other volunteers from Antelope Valley and Santa Clarita.

The strangers met through a Facebook page dedicated to updating residents on Powerhouse Fire related news.

“I saw a post on the Facebook page about help needed to evacuate some animals,” said California State University, Long Beach extension student Travis Tango. “So I did what I could.”

Via Facebook messages and posts, the group came to the aid of a kennel in West Lancaster, where smoke and flames had begun to reach.

Over 40 Pyrenean Mastiffs and Spanish Mastiffs were in danger of the fire, which had begun to creep towards the kennels with increasing speed and billows of smoke.

The group of men and women separated into seven pickup trucks and arrived eager to help.

“We were driving into the area where the fire was,” said Worthington. “The smoke was pretty bad.”

“The fire trucks hadn’t arrived to the area,” said Swanson.

“These dogs were just huge, and we tried many ways to get them into our cars,” said Worthington.

“Two or three people had to help to pick up one dog,” said Swanson. “They weighed about 175 pounds.”

Volunteers said the look of relief on the dogs’ faces was easily noticeable and a joy to experience as they all worked quickly to get the dogs to safety. 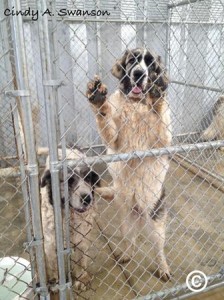 “It was crazy but it all worked out with perfect timing,” said Worthington.

Once the animals were ready to go, they were brought to the Antelope Valley Shelter, where they encountered a few problems checking in.

“I don’t know if they didn’t have proper tagging or paperwork or documentation, but this turned the situation into a nightmare,” said Worthington.

“Once the animals were all checked in, someone then came out and said they had were no longer allowed there,” said Tango.

After a few hours, the dogs were eventually split up between multiple shelters.

Now, several days later, the dogs are back home, safe and sound, thanks to the help of the volunteers.

“It’s always amazing to see how the overall perspective of people shifts when a disaster such as a fire or tornado hits,” said Tango. “People will outwardly show much more compassion and willingness to help no matter the cost to them in doing so.”

The volunteers are happy to have helped the animals and feel accomplished with ensuring that each and every dog was brought to and from the shelter safely.

5 comments for "Volunteers unite to rescue dogs during Powerhouse Fire"