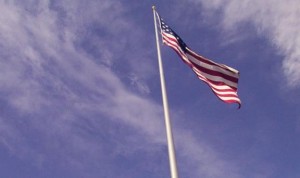 PALMDALE – The Antelope Valley Service Organization Association (AVSOA) in collaboration with the City of Palmdale will hold its annual Flag Day Ceremony on Friday, June 14 at 11 a.m. at the gazebo in Poncitlán Square at 38315 9th Street East in Palmdale.

Mayor James C. Ledford Jr. will give a welcoming address. Bobby Breech, Chairman of AVSOA will serve as Master of Ceremonies.

Chaplain Gary Bassett of Richard K. Carlson VFW Post 3552 will begin the ceremony with a special invocation, which will be followed by the posting of colors, pledge of allegiance and “National Anthem.”

Phil Roberts of The Retired Enlisted Association will sing “You’re a Grand Old Flag,” and Viola Lawrence with the Daughters of the American Revolution will recite “Arthur MacArthur’s Flag.”

Chaplain Gary Bassett will end the program with some comments on the poem “The Defense of Baltimore.”