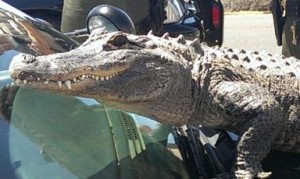 LANCASTER – Lancaster deputies made an unusual traffic stop Tuesday morning. They encountered a large alligator, a kangaroo and a baby monkey in a van that was reported for “suspicious activity”.

Lancaster station received a call of “suspicious activity” near the corner of 50th Street West and Avenue K shortly before 11 a.m. Tuesday [June 4]. 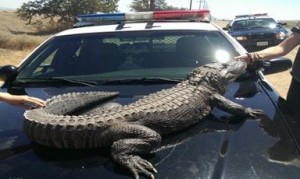 The caller reported seeing two females standing near a van that was parked on the edge of the road. The caller said that one of the females was holding a 4-foot long alligator in her arms. The caller feared the female was about to abandon the beast in the desert. The caller then told the operator that the females had loaded the alligator into the rear of the van and that he was now following them as they drove north on 50th Street West. 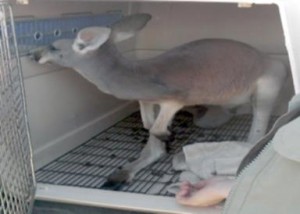 The caller continued to update the van’s location until the responding patrol units arrived.

Deputies located and stopped the van on Avenue D, near 160th Street West.

When they contacted the females they admitted having the alligator inside their van, adding that they also had a kangaroo. The ladies then explained that they are part of the “Zoo to You” program located in Paso Robles, Calif.

They said they had left Quartz Hill Elementary School after showing the students the animals and were traveling back to Paso Robles when they had to make an emergency stop on 50th Street West.

It seems the alligator forgot to use the restroom before leaving the school and soiled its cage. This caused the ladies to stop the van and remove the alligator in order to clean its cage.

After a quick photo op, the deputies bid the ladies farewell saying, “See you later alligator.”

Learn more about Zoo to You Wildlife on Wheels at www.zootoyou.org.