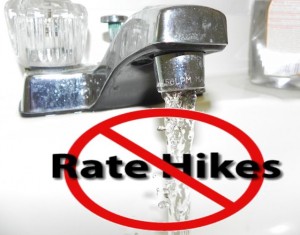 LANCASTER – Concerned citizens packed a Lancaster City Council meeting on May 28 to speak out against the proposed water rate hikes for Lancaster customers serviced by the California Water Service Company (Cal Water).

Affected customers have formed a grassroots group to fight the rate increases. According to AV Residents for Reasonable Water Rates, Cal Water owns a small district in Lancaster, which consists of 671 connections (view map). The Lancaster district is part of a larger Cal Water district in the Antelope Valley that includes Leona Valley, Lake Hughes, and Fremont Valley, with a total of 1500 connections that are also facing proposed water rate increases.

Lancaster residents serviced by Cal Water receive their water from two ground water wells, which use two booster pumps and are stored in three storage tanks, according to Cal Water.

The biggest portions of Cal Water’s costs and justification for the rate hikes include infrastructure improvements, any capital improvements, and personnel and operations costs and benefits, according to Kirsten Larson of the AV Residents for Reasonable Water Rates.

“I didn’t really agree with what they were doing, the area currently pays three times what everyone else pays,” Crist said, in regards to the proposed Cal Water rate increase.

Council members also discussed how Cal Water stated that increases were necessary to keep employees and to pay for health insurance. The council members pointed out that other water companies are able to function properly without these types of water increases.

The council members further reflected on how the community had come together to conserve water, but instead of Cal Water rewarding its customers, they billed them a fee for not using enough water.

According to Lancaster council members, the majority of the people who would be affected by the water rate increases include single moms and families on fixed incomes.

The city of Lancaster is going to be sending a letter of support for the citizens to the California Public Utilities Commission, according to Liz Diachun, a member of the AV Residents for Reasonable Water Rates.

“Everybody was really on the same page. It was nice to see our city government in action and really working for us,” Diachun said of the May 28 council meeting.

AV Residents for Reasonable Water Rates plans on waiting to see what will happen in the next few months, as many hearings will be taking place by the CPUC, ratepayers advocate groups, and Cal Water.

The group has contacted Supervisor Antonovich’s office, and the county has agreed to explore the possibility of Lancaster being relinquished and annexed from Cal Water, according to Kirsten Larson.

Their ideal goal is to keep rates as low as possible and to make water affordable, Liz Diachun explained.

A concerned resident that lives in the Cal Water Antelope Valley district expressed her disgust about the water rate increases, claiming “because we only have one choice of water purveyor or electricity provider it still doesn’t mean we should just blindly accept the bill that comes in the mail and not question why they are charging what they are.”

Although Cal Waters was invited to the council meeting, they chose not to attend.

If you would like more information about the water rate increases and would like to get involved, go to www.facebook.com/AvResidentsForReasonableWaterRates.