PALMDALE – Several properties in Acton and Agua Dulce were burglarized over the past month, with thieves stealing equestrian-related equipment, such as tack and saddles, according to authorities.

Thanks to an alert citizen and a follow-up investigation by Palmdale deputies, more than $20,000 worth of stolen property was recovered this week. Two suspected thieves — 31-year-old Maria Vega and 39-year-old Jose Dominiguez — are now in custody.

Detectives are now looking to return the stolen goods to their rightful owners. 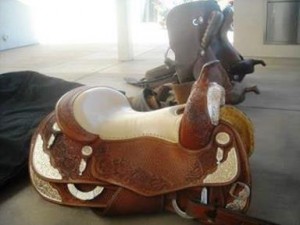 Several weeks ago while traveling through the Sunland area of the San Fernando Valley, a citizen saw a female selling saddles and horse bridles on the side of the road.

The citizen stopped to look at the items and recognized one of the saddles as belonging to a friend. She contacted her friend and learned their property had been burglarized and several items had been stolen, including the saddle she had seen.

On Sunday, May 25, the citizen saw the same female in the Sunland area trying to sell the stolen saddle. 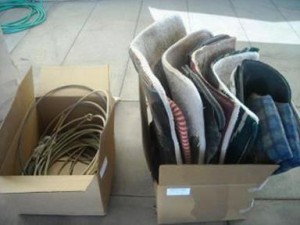 She immediately notified Palmdale Sheriffs who responded to the location to investigate. Deputies identified the female as Maria Vega. While questioning Vega, the owner of the saddle arrived and positively identified his saddle.

Numerous other stolen items were recovered from Vega’s residence. Upon further investigation it was determined Vega was aiding her boyfriend, Jose Dominguez, who had stolen the items. Deputies responded to Dominguez’ residence and recovered several other stolen items, including several very expensive mountain bikes. When questioned about the items, Dominguez claimed he had found the items abandoned in an alley. He later changed his story, claiming he purchased all of the items from an unknown person in Valencia.

Both Vega and Dominguez were arrested and booked at the Palmdale Station on burglary charges.

In all, over $20,000 worth of stolen property was recovered from the suspects’ residences. Palmdale Station detectives have returned many items to their rightful owners but are still looking for other victims. If you or someone you know may have had some equestrian items stolen recently, please contact Detective Dan Wolanski at the Palmdale Sheriff’s Station at 661-272-2442.